From the belief that maggots simply sprung from dead flesh to the example of Newton plunging a needle into his eye to see if pressure caused us to see colours, this book perfectly encapsulates the absurdity and eccentricity of scientific history. 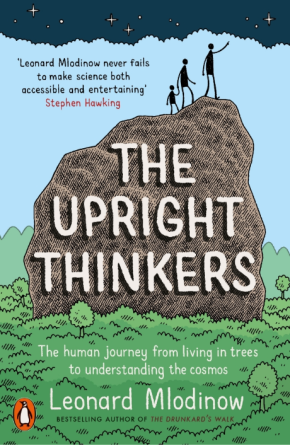 In The Upright Thinkers, Leonard Mlodinow takes you on an informative, engaging journey through the 200,000 years of human existence, examining the different scientific super-stars and theorems at each milestone between the establishment of the first civilisations in Mesopotamia and the ‘Quantum Revolution’ of the 20th century. Studded with moments of hilarity and light-hearted anecdotes, the author crafts a books that never loses the attention of the reader, no matter the complexities of the subject matter, by refraining from bombarding us with the bravado of jargon, numbers and formulas one would expect from most science books.

Mlodinow paints a detailed picture of each of the scientific greats since the very first sparks of civilisation, from Pythagoras to Hawking, skilfully fleshing out their characters beyond the formulas and achievements for which they are remembered, including the flaws, which are often glossed over by history. Misconceptions of these figures are brushed aside and replaced with equally intriguing truths – for example, the fiction of an apple falling on Newton’s head is replaced with information on his reclusive and obsessive nature, which drove him to prick his own eye with a needle for an experiment.

As an equally fascinating sidetrack to the book’s subject, the writer effortlessly brings in analogies to his life, including his time writing for the cult classic TV show Star Trek and a period spent working with the illustrious Stephen Hawking. Coupled with this, he also grounds the highbrow science the book discusses by talking about his father, and his amusing way of looking at science through the eyes of an orthodox Jew. Moreover, his father also provides a sobering testament to the harrowing struggle the Jewish people endured during the 20th century, as a Warsaw Jew during the Second World War.

Mlodinow translates his fluently in-depth knowledge of all realms of science into addictive narrative, interwoven with poignant, at-times gritty and sometimes comical anecdotal aids. So, if you’re looking for a book on scientific theories that isn’t denser than dark matter or as hard to comprehend as string theory, The Upright Thinkers is the perfect book for you.


This entry was posted on August 24, 2016 at 3:15 pm and is filed under books, Engineering, History, Science, Technology, Uncategorized. You can follow any responses to this entry through the RSS 2.0 feed.
You can leave a response, or trackback from your own site.