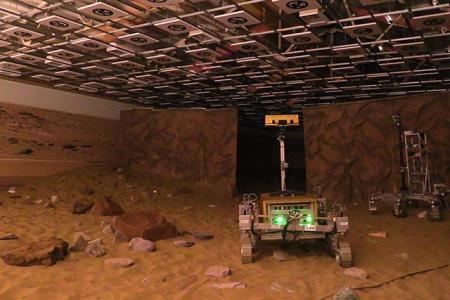 Recent news from the European Space Agency and its Russian counterpart Roscomos that their ExoMars Martian rover is facing a two-year delay, which may see it beaten to the Red Planet by a similar Chinese project was unfortunately timed. It came just a few days after a prototype was navigated through a simulated Martian landscape at the Stevenage premises of manufacturer Airbus Defence and Space by UK astronaut Tim Peake, steering from the International Space Station.

The experiment, in which Peake had to use the rover to find several objects inside a cave, demonstrated the sort of situation where vehicles like ExoMars will play a key part in future space exploration. Although they can move autonomously, there are situations where it’s easier for a human to assume control.

The launch now scheduled for 2020 is the second stage of the ExoMars mission. An experimental lander and an orbiter that will study the Martian atmosphere took off earlier this year for Europe’s first shot at landing an object on the surface of Mars since the Beagle 2 mission. 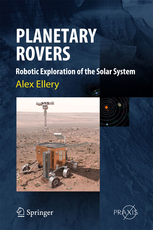 Anyone wanting a thorough technical account of the crucial part rovers will play in future space interplanetary exploration would do well to turn to the recently published ‘Planetary Rovers: Robotic Exploration of the Solar System’ by Professor Alex Ellery (Springer, £117, ISBN 3642032583), an IET Fellow who is a Canada Research Chair in Space Robotics & Space Technology in the Mechanical & Aerospace Engineering Department at Carleton University, Ottawa.

Weighing in at over 700 pages and with the inside story on both ExoMars and the US’s successful Mars Exploration Rover programme, ‘Planetary Rovers’ provides a comprehensive review of the new range of technologies being introduced to spacecraft design, from vehicle engineering and mechatronics to robotics and artificial intelligence.

Planetary missions have to be designed with a very different approach to that adopted for Earth-orbiting missions. There are great uncertainties about the operational environment to account for, not to mention new technologies including locomotion, autonomous navigation, rover avionics, mission communications’ architecture and power generation and thermal control.

Starting with an introduction to the use of robotic rovers for planetary exploration and their relationship to other terrestrial applications, including oceanography, Ellery explains how terrain in particular is a major design driver. There’s also a look at the future of robotic astrobiology missions using biomimetic robots and the part that nanotechnology could play in planetary exploration.

Add the technical details of traction and control systems, plus robotic vision for both navigation and scientific investigation and a host of other topics, and the result is a comprehensive overview of this rapidly evolving area of technology.


This entry was posted on May 24, 2016 at 3:44 pm and is filed under Uncategorized. You can follow any responses to this entry through the RSS 2.0 feed.
You can leave a response, or trackback from your own site.