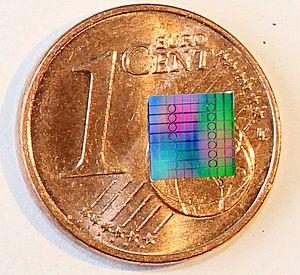 “This is equivalent to more than five billion phone calls or more than two million HD TV channels. It is the highest data rate ever reached using a frequency comb source in chip format,” said Professor Christian Koos of Karlsruhe Institute of Technology (KIT).

Optical solitons – wave packages that propagate without changing their shape – were key to the transmission, although they were not actually transmitted.

Instead, the researchers used silicon nitride micro-resonators in which solitons circulate continuously – the solitons form spontaneously when a continuous-wave laser is directed at the resonator, through non-linear optical processes caused by the high intensity light field. 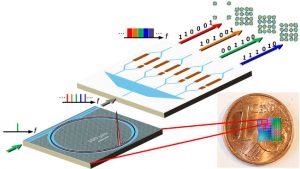 These solitons can be used to generate a broadband optical frequency comb – a multitude of spectral lines aligned on a regular equidistant grid – John Hall and Theodor Hänsch got the 2005 physics Nobel Prize for such combs.

“So-called Kerr frequency combs feature large optical bandwidths along with rather large line spacings, and are particularly well suited for data transmission. Each individual spectral line can be used for transmitting a separate data channel,” said KIT, whose researchers worked with a team at École polytechnique fédérale de Lausanne (EPFL).

“Our soliton comb sources are ideally suited for data transmission and can be produced in large quantities at low costs on compact microchips,” said EPFL’s Professor Tobias Kippenberg, whose group, in 2014, first described optical solitons.

According to KIT, the resonators take little power and could cut optical comms light source energy consumption – an EPFL spin-off is working on this.

For coherent communications, similar comb sources can be used for demodulation at the receiver.

The work is published as ‘Microresonator-based solitons for massively parallel coherent optical communications‘ in Nature.