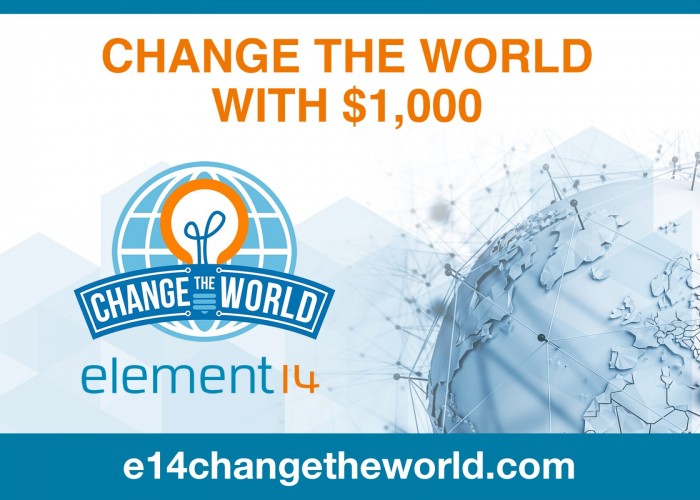 The company says it wants to find out how the world of electronics can have a positive impact on the world – it is challenging designers to come up with creative ideas on how they could use $1,000 of products from element14.

The initial stage (to 27 January) is to submit ideas, rather than finished designs or prototypes, note.

The ten chosen winners will get the opportunity to talk to the company’s development teams (who worked on Codebug and BBC micro:bit) about ways of making their idea a reality, as well as receiving $1,000 worth of products.

Do you have an idea that could Change the World? Engineering is one way in which talent, skills, expertise and imagination can be combined and used to Change the World for the better, both now and in generations to come. These changes could be big and bold, but it is often the smaller, ever evolving ideas that can have the biggest impact. Now you have your chance to make your mark, what would you do to Change the World?

20th January 2017: The final date to submit your entry

14th March 2017: Finalists will be announced

28th April 2017: Video entries will need to be submitted

Second week of June 2017: Winners will be announced

Finalists: 25 Finalists will be asked to submit a video describing their idea in more detail.

Winners: 10 Winners will be chosen to receive the $1,000 worth of products that they selected to support their idea and the opportunity to talk to our teams about making their idea a reality.

“This competition gives engineers, students and makers the opportunity to showcase their creative ideas. We are excited about the opportunity to help some of these ideas become successful projects.” Richard Curtin, Strategic Alliance Director adds,

“We have a long history of supporting our customers’ development, design and pre-production requirements and this competition will help some great ideas that might not otherwise be developed to become real projects”.

Read more about Change the World »

The competition was launched at Electronica.