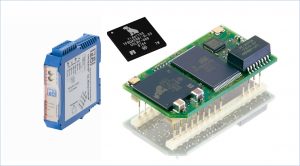 Analog Devices has moved into the market for real-time Ethernet with the acquisition of US-based firm Innovasic, which has developed interface chips for deterministic Ethernet.

Seen as a high speed alternative to the serial fieldbus networking protocol in  factory automation, robotics and industrial IoT, real-time Ethernet is the focus of a new standards push for robust, synchronised networks.

The IEEE has recognised that new standards will be required to enable Ethernet to meet the determinism demands for these emerging applications and is developing the new Time Sensitive Networks (TSN) standards.

Innovasic has been playing a role in addressing some of the early requirements of these new IEEE TSN standards.

The company says it has demonstrated how time-critical control data can be managed on an Ethernet network. It does this in a switching IC which implements technologies that are being adopted by the IEEE standards organisation.

Ethernet has traditionally been a “best-effort” network. To allow Ethernet to be deployed in mission critical applications, it is necessary to add specific features including time synchronization, scheduled traffic, ingress policing and seamless redundancy. This is to ensure that specific data traffic can be transmitted on time and throughout the entire network topology.

Deterministic Ethernet was first discussed for use in factory automation networks and the result is a number of open standards that are used in Industrial Ethernet networks.

“These customers also strive to achieve the efficiency and cost improvements promised by wider deployment of Ethernet with the upcoming Industrial IoT,” said Carlin.

The Innovasic team will join ADI’s Industrial Automation Business Unit and will be led by Jordon Woods, Innovasic’s co-founder and COO, and continue to be based in Albuquerque, New Mexico.

“Innovasic and ADI have both pursued solutions to customers’ most challenging technical problems while committing to maintain long product life cycles to meet the unique requirements of the industrial market,” said Woods.