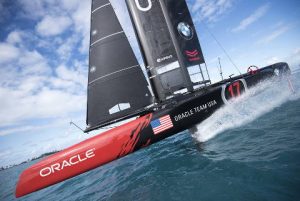 “The innovative control system on this boat is adapted from the aerospace world,” said Oracle team USA MD Grant Simmer. “This hydraulics control system allow us to actively control the foils and overall stability of the yacht with a significant improvement in performance.”

The catamaran yacht was unveiled yesterday in Bermuda, following a two year collaboration between the team and Airbus. 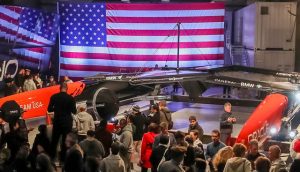 “The AC Class yacht really displays what a sailing champion and an aircraft manufacturer can achieve together. We share the science of aerodynamics and we are all very proud of both teams for their pioneering spirit and engagement,” said Airbus executive v-p of engineering Charles Champion.

“30 engineers worked over-time: on the structure, on the foils, on the aerodynamics, on the wings, on the instrumentation, on the hydraulics. What we learned, was how to go faster, to test some new ideas, and to look if we can use our technology in a different manner, which maybe we will use back on our aircraft – typically structures, systems, instrumentation. We look forward to seeing this boat flying above water later in June.”

In 2013, Oracle defended its title in the AC72 class – a wingsail-powered catamaran that flew above the water on hydrofoils at over 50mph, according to Airbus. For the 2017 event, the team will be racing in the new AC class, which is a smaller (~15m), lighter and more finely-engineered foiling catamaran than its predecessor that is expected to reach similar speeds