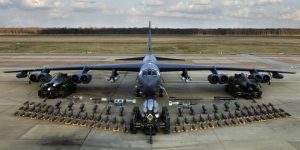 A weakening defence export order backlog points to a contraction in the market by 2018.

Defence trade deliverables grew substantially in 2016. Markets expanded by $4.3 billion to hit $62.5 billion, as imports rose despite global defence spending falling between 2010 and 2013.

However the total export backlog – orders placed but yet to be delivered – has fallen by around five percent and is on track to decline rather than stabilize over the coming three years.

Middle East countries imported $21 billion in defence equipment in 2016 – one third of the entire global market – and will import at least $22 billion annually for the next four years.

Saudi Arabia increased its lead as top global importer, now importing nearly three times as much as its closest rival, India. This dominance is set to continue for at least five years with further large aviation, vehicle and naval orders.
The US remained the highest exporter in 2016, supplying $23.3 billion worth of military goods.

The largest Middle Eastern defence importers – Saudi Arabia, United Arab Emirates, Algeria and Iraq – remained among the top importers in the world for 2016, importing a total of $15.2 billion in defence systems. This figure is up from $9.9 billion in 2014, and represents more than all of Western Europe’s imports combined.

“Saudi Arabia’s 2016 imports grew from $4.9 billion to $8.3 billion – an increase that is three times more than the entire Sub-Saharan African market,” says Ben Moores at Jane’s, “as the Middle East has assets against which it can borrow until oil prices recover, we expect to see sustained growth in defence spending for the next few years.”

Based on the existing order backlog, Jane’s forecasts that this region will continue to import an annual average of $22 billion in equipment over the next four years, before dropping off sharply after 2020.

The US remained the highest exporter in 2016, increasing its relative market share at the expense of Russia to supply $23.3 billion worth of goods and equipment in 2016, compared with $21.5 billion in 2014. Its primary export strength is in its aerospace products; set to continue with strong orders in place for its F-35 program.

For the third year in a row, Saudi Arabia was the primary recipient of American military equipment in 2016. Although the US’s 10-year backlog remains strong, political uncertainty in countries such as Saudi, UAE and Qatar means there is a possibility that some of these projects may be cancelled.

Western European exports fell from $16.3 billion in 2009 to $14.9 billion in 2013, but increased notably to hit $17.8 billion in 2016. Germany, France and Sweden all enjoyed sizeable increases in export levels over the past year, primarily in military aerospace markets.

“Military imports for European states West of Russia totalled $900 million in 2016, and the delivery backlog for these states currently stands at $4.6 billion for the next five years, confirming our earlier forecasts,” Moores said.

Russia, the region’s leading exporter and the world’s second largest exporter, saw a slight decline in 2016 to $6.3 billion. However, this is not indicative of further decline in the short term, as Russia has a strong backlog out to 202

Military equipment imports to East Asia increased from $10.4 billion in 2015 to $12.8 billion in 2016. China has been cutting import deliveries over the last six years but this has been counter balanced by South Korea, Taiwan and Japan which have all seen large increases over the same time frame.

“There remains a slight chance that South Korean exports will overtake China in 2017 depending on delivery schedules of various programmes but in the longer term China has a bigger overall backlog,” Moores said.