Which is a good reason to highlight some developments around the BeagleBone Black single-board computer: there’s a new version and two new Capes from the BeagleBone team. 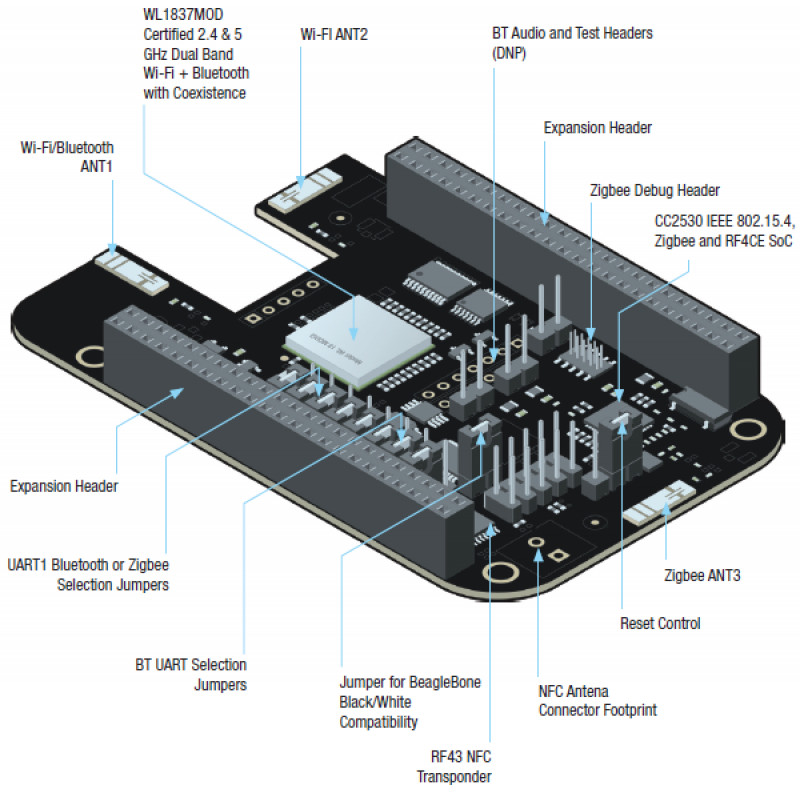 First of all the BeagleBone Black Wireless, which is basically a BeagleBone Black with on-board 802.11 b/g/n 2.4GHz Wi-Fi and Bluetooth. It’s following in the path of the Raspberry Pi 3 by building in Wi-Fi support to simplify wireless comms.

“Also retained is the 4GB of onboard eMMC memory with Debian Linux preinstalled, allowing the BeagleBone Wireless to boot in around 10 seconds and have you developing through your web browser in less than 5 minutes using just a single USB cable.”

You can see the details of the board by expanding the graphic above, and a data sheet is online.

Note that it marks the introduction of the Octavo OSD3358 SiP, integrating BeagleBone functionality into one BGA package.

Given that we are talking about credt card-sizes peices of kit, room has to be made for new features. It means this particular BeagleBone has lost its 10/100 Ethernet port, making room for a TI WL1835 WiLink wireless interface.

The full specification is:

Not forgetting the the two new capes…

Note that the new Wireless Cape takes BeagleBone Black beyond the capabilities of BeagleBone Black Wireless, points out Steve Bush in his news piece on the release. It is based on Texas Instruments WiLink 8 (WL1837) industrial dual‑band (2.4GHz and 5GHz), 2×2 MIMO Wi-Fi, Bluetooth and Bluetooth Smart (aka Bluetooth LE), which also has Zigbee and NFC.

The cape comes Debian Linux pre-installed and 4Gbyte of onboard eMMC memory. “Designers can be developing using their web browser in less than 5 minutes using just one USB cable,” said Farnell.

Note there’s also a Display cape available too. It has connections for a 4.3 inch colour touchscreen an LED backlight and capacitive overlay “for a smartphone-like interface”.

The cape is aimed at interactive projects, embedded systems and standalone installations.

Pricing is around £55 for the BeagleBone Black Wireless, £35 for the display cape and £44 for the wireless cape.