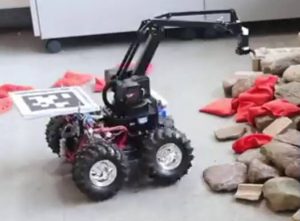 Researchers at the University of Buffalo have turned to beavers to solve some robot problems.

“When a beaver builds a dam, it’s not following a blueprint. Instead, it’s reacting to moving water. It’s trying to stop the water from flowing,” said Buffalo researcher Dr Nils Napp. “We’re developing a system for autonomous robots to behave similarly. The robot continuously monitors and modifies its terrain to make it more mobile.”

The task they set their robot was to get up a rough pile of rocks – allowing it an endless supply of bean bags with which to smooth its passage, scattered around its environment. 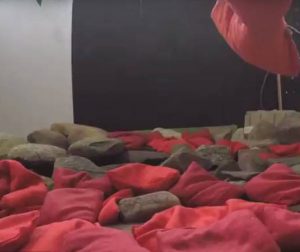 Napp’s algorithms continuously monitor and scan the robot’s environment, causing the robot to pick up bean bags and drop them into the holes between rocks, eventually making a ramp over which to climb the rocks.

“The robot can operate completely by itself. It takes its cues from its surroundings, and will keep modifying its environment until it has created a ramp,” said Napp. “That means it can fix mistakes and react to disturbances – for example, pesky researchers messing up half-built ramps, just like beavers that fix leaks in their dams.”

There is a video.

Termites appear not to have a plan to build a mound. Instead, one termite will randomly deposit a ball of mud with pheromones on.
Attracted to the pheromones, other termites are more likely to place their mud balls at the same place.
This behaviour ultimately causes termite nests.

With Wikipedia, according to the University, one user creates a page in the encyclopedia.
Another user will modify that page with additional information.
The process continues indefinitely, with users building more complex pages.