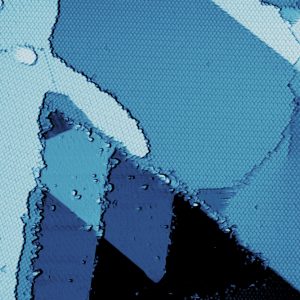 Borophene is a molecule made of boron atoms.

Like graphene, borophene is a two-dimensional sheet-like molecule, but thought to be a better conductor of electrons than graphene.

Unlike graphene, it is not thought to occur in nature and so there are no handy lumps of borophite from which to shave flakes.

Instead, it is made synthesised on a silver surface, where it cannot be measured easily.

In an attempt to deposit a layer of organic semiconductor on top of borophene-on-silver, the team of Professor Mark Hersam of Northwestern University added a material known to self-assemble on essentially any material, according to Northwestern.

However, the chemical, perylene-3,4,9,10-tetracarboxylic dianhydride (PTCDA), had other ideas and what formed were areas of borophene (dark blue diamonds in image) and areas of PTCDA (mid-blue diamond), both laying on the silver.

Where they touched, an electronically abrupt hetrojunction spontaneously formed along the boundary.

“This is a nice bit of serendipity because we solved a problem without any additional intervention required. Borophene is unique in its ability to form abrupt interfaces via self-assembly,” Hersam said. “It did not exist a year ago. Twelve months later, we’re already forming essentially perfect interfaces.”

The next challenge, described as non-trivial, is to lift the borophene off the silver and move it to an inert substrate to get a good look at its electronic properties.

“We’re beginning to understand its chemistry, which will guide our efforts to transfer the material onto appropriate substrates for further integration,” said Hersam.

The work is described in ‘Self-assembly of electronically abrupt borophene/organic lateral heterostructures‘, a paper in Science Advances.