In reality, it is naive to believe that being 40%, 70%, or whatever percentage less than 100%, is even close to being self-sufficient in the IC industry.

In just about every case, the lack of just one low-value IC (e.g., a mixed-signal analogue device), process material (e.g., a specific chemical or gas used in fabricating ICs), or package type will stop the entire electronic system from being produced and shipped.

As an example, in the early 1980s, the U.S. government attempted to make sure that every wafer processing and packaging material as well as every piece of semiconductor processing equipment that was used to make military ICs have at least one U.S. source.

Even more than 30 years ago, when IC processing was much less complex than it is now, this program had to be abandoned due to the impossible task of making sure there was a U.S. source for literally thousands of items. The bottom line is that anything less than 100% self-sufficiency in the IC industry is not self-sufficient.

The success of MIC 2025 is fundamentally dependent upon two things—funding and technology. The goals of MIC 2025 have almost no chance of success without strong results in both of these areas. IC Insights considers each one to have equal weight on the potential final outcome.

There is near-unanimous consensus that funding will not be a hindrance for the potential success of MIC 2025. China’s National Government has approved approximately $20 billion of funding support for its IC industry programs with almost another $100 billion of possible support coming from local Chinese governments, provinces, and private investors. In total, the tens of billions of dollars of funding now targeting the IC industry is probably sufficient to construct at least 10 high-volume 300mm IC production fabrication facilities.

It should be noted that regardless of what happens with China-based IC production in the long run, IC equipment companies are in prime position to benefit from this massive spending spree over the next few years.

IC Insights believes that the huge roadblock standing in the way of the success of MIC 2025 is the ability of the Chinese to acquire the IC technology to be used in the newly funded fabs. 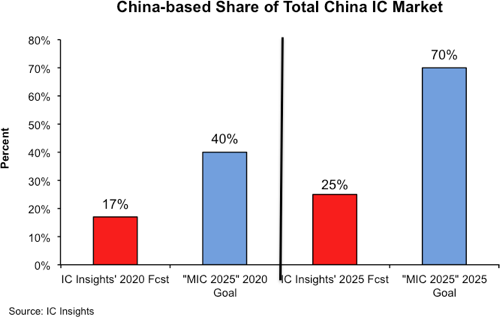 Beginning in 2014, the Chinese sought to acquire technology by acquiring existing IC suppliers. The Chinese had some early success in acquiring companies like ISSI and OmniVision, but most governments are now on “high alert” with regard to China’s IC industry ambitions and future foreign IC company acquisitions will be very difficult to complete. Essentially, the window of opportunity for the Chinese to attain IC technology through foreign company acquisitions is now closed.

Although the amount of money reported to be allocated toward constructing the new indigenous Chinese company IC fabs has been massive, the technology announced to be used in these fabs has in every case been at least two generations behind what the market leaders in that segment are currently using or will be using when the fab is built.

While all of the currently announced China IC fabs seem to be more than adequately funded, none of them appear to possess the IC technology needed to compete with the leaders in their respective product segments.

There have recently been reports that the Chinese companies building the new fabs discussed above are hiring IC engineers from Samsung, SK Hynix, and Intel’s China-based IC facilities. This method has been mentioned as one way for Chinese companies to “develop their own” IC technology as these engineers bring IC process knowledge/experience acquired at their former employer with them. In IC Insights’ opinion, this is a very dangerous way to “develop” IC process technology.

In 2003, in China-based pure-play foundry SMIC’s second year of production, TSMC filed a lawsuit alleging that SMIC hired more than 100 former TSMC employees and asked them to provide SMIC with TSMC trade secrets. Moreover, TSMC alleged that SMIC infringed on five of TSMC’s IC process technology patents (later expanded to eight patents). In early 2005, SMIC and TSMC settled the lawsuit with SMIC paying TSMC $175 million and TSMC gaining an 8% stake in SMIC. Prior to the settlement, a California jury returned a verdict against SMIC in a U.S. lawsuit filed by TSMC.

With the stakes so high, once the newly opened Chinese-owned memory fabs begin production, expect the reverse engineering teams at Samsung, SK Hynix, Micron, Intel, Toshiba, and Western Digital (SanDisk) to shift into high gear by taking apart the new Chinese DRAM and 3D NAND devices to determine which of their patents are being infringed upon by these new memory players. IC Insights believes that with the decades of high-volume DRAM and NAND flash production history of the major memory suppliers, it will be almost impossible to develop new DRAM and NAND flash technology without infringing on numerous patents within these companies’ extensive portfolios.

Given the sheer size of the expected expenditures for new Chinese IC facilities, as well as an expanding presence of foreign IC producers (e.g., Intel, Samsung, etc.), IC Insights believes there will be a significant improvement in the share percentage of China-based IC production through 2025 (Figure 2), but nowhere near the levels forecast in the MIC 2025 plan. As shown, IC Insights forecasts that this share will increase to 17.0% in 2020 and to 25.0% in 2025, each less than half of the original MIC 2025 goals.