Samsung and Apple still lead the pack but their unit market share is slipping.

In third place comes BBK Electronics with its cOPPO and Vivo brands which are the two fastest growing smartphone suppliers with each  growing almost 90%.

With orders sagging for Apple’s pre-iPhone 7 smartphones (the iPhone 7 was first released on September 7, 2016), Apple’s total smartphone shipments dropped by 7% in 2016, much worse than the total 4% growth rate exhibited for the worldwide smartphone market.

Although Samsung and Apple still hold a strong share of the high-end smartphone segment (>$200), it appears that both companies are losing smartphone marketshare to the up-and-coming Chinese producers like Huawei, OPPO, and Vivo.

Overall, there was very little “middle ground” with regard to smartphone shipment growth rates among the top 14 suppliers in 2016.

As shown, seven of the top 14 companies registered declines in 2016 shipments while five companies logged 25% or better increases.

In fact, four Chinese smartphone suppliers’ shipments surged by greater than 30% (Vivo, OPPO, Gionee, and Huawei) in 2016. LeEco, which only began shipping its smartphone handsets in 2015, became Coolpad’s largest shareholder in October 2016. As a result, IC Insights combined the two companies’ smartphone sales for 2015 and 2016. 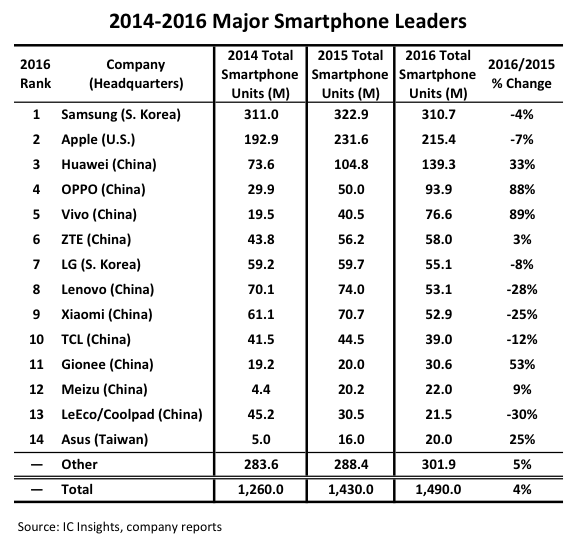 In 2014, Japan-based Sony was ranked 10th in smartphone shipments with sales of 40.0 million handsets. However, in 2016, Sony’s shipments of smartphones had dropped precipitously to only 15.1 million (with sales expected to increase only slightly in 2017 to about 16 million).

In contrast to the weakening fortunes of Sony, 2015-2016 smartphone sales from most of the top China-based suppliers surged. In fact, Huawei, the third largest smartphone producer in 2016, has set its sights on surpassing Apple within the next five years.