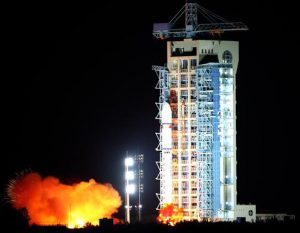 The experiment used two satellite-to-ground down-links with a summed length varying from 1,600 to 2,400km.

“So far, entanglement distribution has only been achieved at a distance up to ~100km due to photon loss in optical fibres or terrestrial free space,” said the Chinese Academy of Sciences. “Another approach makes use of satellite and space-based technologies. The main advantage of this approach is that most of the photons’ transmission path is almost in vacuum, with almost zero absorption and de-coherence.”

“To optimise link efficiency, the scientists combined narrow-beam divergence with a high-bandwidth and high-precision acquiring, pointing, and tracking [APT] technique,” said the Academy. “By developing an ultra-bright space-borne two-photon entanglement source and high-precision APT, the team established entanglement between two single photons separated by 1203 km, with an average two-photon count rate of 1.1Hz and state fidelity of 0.869±0.085. Using the distributed entangled photons, the scientists performed the Bell test at space-like separation and without locality and freedom-of-choice loopholes.”

Compared with previous methods of entanglement distribution by direct transmission of the same two-photon source, using the best performance and most common commercial telecommunication fibres, respectively, said the Academy, the effective link efficiency of the satellite-based approach is 12 and 17 orders of magnitude higher, respectively.

Distributed entangled photons can be used to distribute cryptography keys, in ways that are thought to be secured by quantum physics. “Another immediate application is to exploit distributed entanglement to perform a variant of quantum teleportation protocol for remote preparation and control of quantum states,” said the Academy.

The work is published in Science as: ‘Satellite-based entanglement distribution over 1200 kilometers‘.