Although there was a slight pause in the upward trajectory in 1Q17, 2Q17 set a new record for quarterly spending outlays. 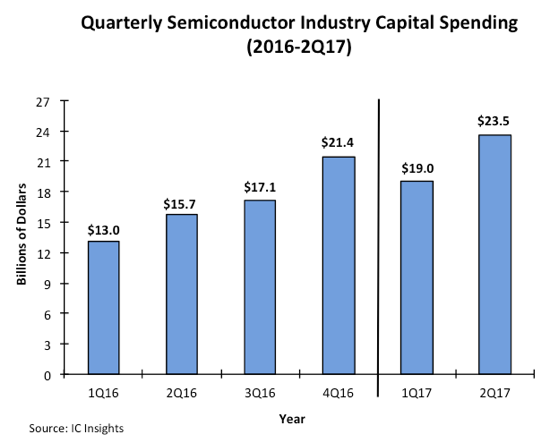 Moreover, 1H17 semiconductor industry spending was 48% greater than in 1H16.

IC Insights believes that whether industry-wide capital spending in the second half of 2017 can match the first half of the year is greatly dependent upon the level of Samsung’s 2H17 spending outlays. 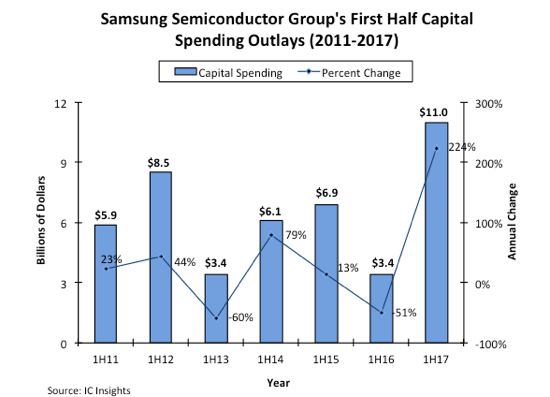 In fact, Samsung’s capital expenditures in 1H17 represented 25% of the total semiconductor industry capital spending and 28% of the outlays in 2Q17.

While the company has publicly reported that it spent $11.0 billion in capital outlays for its semiconductor division in 1H17 (a $22.0 billion annual run-rate), Samsung has been very secretive about revealing its full-year 2017 budget for its semiconductor group (it might be afraid of shocking the industry with such a big number!).

At this point, it is impossible to tell. IC Insights believes that Samsung’s full-year 2017 capital expenditures could range from $15.0 billion to $22.0 billion!

If Samsung spends $22.0 billion in capital outlays this year, total semiconductor industry capital spending could reach $85.4 billion, which would represent a 27% increase over the $67.3 billion the industry spent in 2016.

It is interesting to note that two of the major spenders, TSMC and Intel, are expected to move in opposite directions with regard to their 2H17 capital spending plans. TSMC spent about $6.8 billion in capital outlays in 1H17.

If it sticks to its $10.0 billion budget this year, which it reiterated in its second quarter results, it would only spend about $3.2 billion in 2H17, less than half its outlays in 1H17.