The supplier is Pi Supply, who we’ve covered before on Gadget Master – see A tip of the hat to the Raspberry Pi Flick HAT – and they highlight their boards should reduce both the price of the necessary hardware and the setup time required for such systems.

But let’s drill down into detail on the IoT LoRa Gateway HAT that builds an inexpensive LoRa gateway (compatible with The Things Network) that works with a Raspberry Pi, or other single board computer. 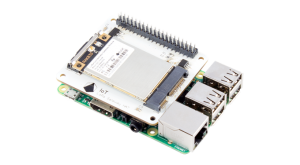 Pictured is the IoT LoRa Gateway HAT on a Raspberry Pi 3 Model B+. The Pi Supply team writes:

The IoT LoRa Gateway HAT utilises the RAKWireless RAK833 mPCIe LoRa gateway concentrator module which is based on Semtech SX1301 LoRa technology and provides a fully LoRaWAN Compliant gateway listening on 8 channels at the same time.

The HAT is available in two different frequency variations, dependent on your country: 868 MHz or 915 MHz.

“A LoRa gateway – such as our IoT Hat – is the piece of hardware in a Lora WAN network that enables you to send and r”eceive data packets from a lora node – such as our IoT LoRa pHAT or Micro:bit LoRa Node – you can then send the data to a cloud software platform such as The Things Network, and use a Raspberry Pi to manipulate that data as you see fit,” says Pi Supply.