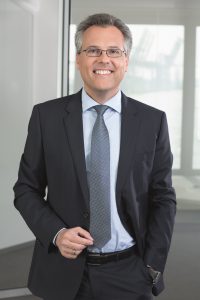 “I would say there are four elements which are fundamental for self-driving cars and all four may not be necessary at the same time,” Kurt Sievers, executive vp at NXP and general manager of the company’s automotive business unit (pictured) told me.

“The first is sensors,” says Sievers, “we’re not definite about radar or LIDAR. We believe we can get radar so high performance that LIDAR won’t be needed.”

“The second is super-digital extremely precise mapping,” says Sievers, “that’s why the German car industry got started with HERE.” Sievers thinks that 50cm precision would be sufficient though others say 10cm.

We’re not religious about how to do it,” adds Sievers, “because a precise map requires lots of data being processed and stored.” And that plays to NXP’s strengths.

The third thing required for driverless cars is that they be connected to eachother. For this, either 5G cellular or 802.11p WiFi is proposed.

“5G is not there but is expected to catch up,” says Sievers, “but it can be done without cellular.” He envisages a system where “we will connect the W-LAN to the cellular guys to use a broadcast system to control cars.”

President Obama intended to mandate the installation of W-LAN in all new cars, which would be a huge boost for the technology, but whether the intention will survive the hand-over of the Presidency is anyone’s guess.

After sensors, maps and inter-car connectivity, the fourth requirement for driverless cars is “artificial intelligence for the sensor fusion to make sense of all the information coming into the car,” says Sievers.

While the industry may agree on the four ingredients for driverless cars, nonetheless, says Sievers, “the industry follows different philosophies on which of the four are needed. Some players think it needs digital maps, others say that if we have the three other elements we can do without the digital maps.”

Sievers tells about a test drive in a driverless car in Mountain View where the hedge down the middle of the road had been trimmed from one metre high to half a metre high and this gave the car a problem. Maps to back up the image sensors would be the answer to that but, he said, “with maps you need a perfect update mechanism.” It is not at all clear how that could be implemented.

There is, of course, a fifth requirement – security. Hacked cars are a possibility and could be a very dangerous one. While conceding that there is no such thing as total security, Sievers says that the highest level of hardware-based security which the industry can offer e.g. the level of security used in payments systems, should be applied to cars.

“To my mind the number of lives saved (by driverless cars) is so much greater than the potential risk of a hack that it is the right balance,’ says Sievers.

Asked when he thinks driverless cars will be able to go anywhere on any road, Sievers replies: “8 to 10 years.”