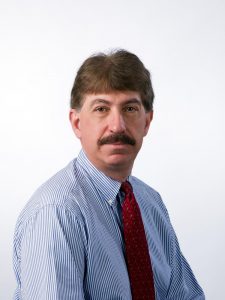 Everspin showed off a wafer of 1Gbit MRAMs made on GloFo’s 28nm process at Electronica. The technology has been scaling at 18 months per generation and is set to scale further.

It went from a 90nm 64Mbit currently in production to a 40nm 256Mbit which is sampling to this 1Gbit which has just got into silicon. All three generations were made by GliFo’s fab in Singapore.

The MRAM specialist has done a deal with GloFo allowing the foundry to use embedded MRAM in its customers’ SoCs.

GloFo plans to have the process running on 22nm FD-SOI either late next year or early 2018.

Spin-torque switching MRAM has the advantage over flash that “embedded flash on SOI is almost impossible,” says LoPresti.

As a single transistor cell MRAM is dense compared to 6T SRAM or eflash which needs large transistors for programming.

LoPresti has adopted a practical philosophy for MRAM. “Everyone is looking for a universal memory but it’s more like the world is going for specialty memories – phase change, resistive RAM, nano – there’s not going to be one solution that fits all,” he said.