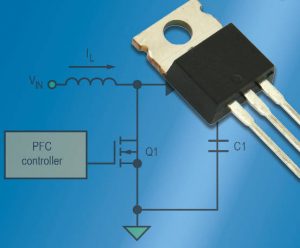 “With the SiHP065N60E and the upcoming fourth-generation 600V E Series family, we are addressing the need for efficiency and power density improvements in the first stages of the power system architecture – power factor correction and subsequent high-voltage DC/DC converter blocks,” said Vishar marketing director David Grey.

Output capacitances Co(er) and Co(tr) are 93pf and 593pF respectively.

“These values translate into reduced switching losses to save energy in power factor correction and hard-switched DC/DC converter topologies,” said the firm.

It comes in a TO-220AB package, is RoHS-compliant, halogen-free and designed to withstand over-voltage transients in the avalanche mode with guaranteed limits through 100 % UIS testing.