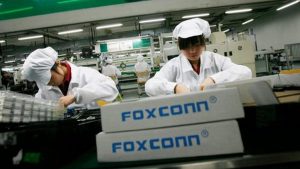 The plant could be built as a jv with Apple. Apple accounts for about half of Foxconn’s revenues.

The plan was revealed after Foxconn Chairman Terry Gou had a talk about it with Softbank boss Masayoshi Son.

“I thought it was a private conversation, but then the next morning it was exposed,” said Gou, “there is such a plan, but it is not a promise. It is a wish.”

Gou added that growing demand for larger display panels made US production a better option than importing parts from China.

“We’re going to get Apple to start building their damn computers and things in this country instead of in other countries,” said President Donald Trump on the campaign trail threatening to slap a 45% tariff on China imports.

Apple asked Foxconn and other Asian suppliers to do a report on the feasibility of setting up manufacturing sites in the US.

Foxconn employs about a million people in China.