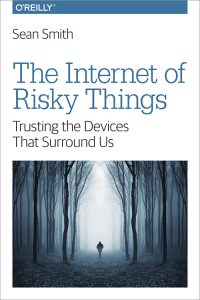 With a focus on concrete solutions, The Internet of Risky Things explains how we can avoid simple flaws that have plagued several dramatic IT advances in recent decades. Developers, engineers, industrial designers, makers, and researchers will explore “design patterns of insecurities” and learn what’s required to route around or fix them in the nascent IoT.

The author is Professor Sean Smith, who is described as working in information security – attacks and defenses, for industry and government – since “before there was a Web”.

In graduate school, he worked with the US Postal Inspection Service on postal meter fraud; as a post-doc and staff member at Los Alamos National Laboratory, he performed security reviews, designs, analyses, and briefings for a wide variety of public-sector clients; at IBM T.J. Watson Research Center, he designed the security architecture for (and helped code and test) the IBM 4758 secure coprocessor, and then led the formal modeling and verification work that earned it the world’s first FIPS 140-1 Level 4 security validation.

Save this date in your diary: Tuesday 25 April – the IoT Secure Systems Summit 2017

The full table of contents is as follows:

Names and Identity in the IoT
Who Is That, Really?
The Standard Cryptographic Toolkit
The Newer Toolkit
IoT Challenges
Moving Forward
Works Cited

Business, Things, and Risks
How the IoT Changes Business
Profit and Safety
When the User Is the Product
Profit and Technological Choices
Businesses and Things and People
Works Cited