Capacitance was 38mF/cm2, according to the paper ‘Flexible self-charging supercapacitor based on graphene-Ag-3D graphene foam electrodes‘ published in Nano Energy, which also reveals 93.4µWh/cm2 energy density and 0.27mW/cm2 power density.

It is an EDLC (electrochemical double layer capacitor) type supercapacitor, built from a stack of layers.

The basic structure is assembled in a PET plastic film, onto which a multi-layer graphene sheet is bonded – this sheet will later be one of the two current collector layers – one of the external electrodes is bonded to it. 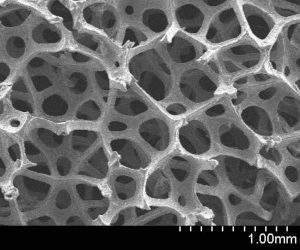 Graphene foam (see image from GrapheneSupermarket.com) is made by CVD on a metal foam template, with the metal later removed. It is porous on more then one level – the large (100μm-scale) holes in the image are just part of the story, as the thin structures visible are also porous – holes of 50nm2 are most common.

Into the foam goes a solution of phosphoric acid electrolyte, and the foam then covered with a layer of ion-permeable non-woven cloth – which also acts as an electrolyte reservoir.

This assembly is half the capacitor – which is completed by stacking an identical structure up-side-down on top – cloth-to-cloth, with the two PET layers on the outside, and sealing with tape to keep the electrolyte in.

According to the paper: “There are various factors that can contribute for the areal capacitance enhancement, comprising: 1) layer-by-layer structure of graphene surface – silver – graphene foam electrode; inﬂuence of silver conductive paste on ion exchange mechanism; and high conductivity free-standing porous graphene foam facilitating the access of ions towards the electrochemical double layer structure.”

The team that developed the capacitor, from Glasgow’s Bendable Electronics and Sensing Technologies (BEST) group, have showed “that it provided power consistently across 25,000 charging and discharging cycles,” said the University, by cycling it between 0V and 0.8V.

In a proof of concept, the capacitor was further sandwiched between a flexible solar cell (already developed by the BEST group) and a copper oxide-based pH sensor, to form a thin flat flexible wearable self-powered skin pH sensor – energy transfer between capacitor and solar cell was mediated by an STMicroelectronics SPV1050 energy harvester plus battery charger chip.

“We’re very pleased by the progress this new form of solar-powered supercapacitor represents,” said team leader Professor Ravinder Dahiya. “A flexible, wearable health monitoring system which only requires exposure to sunlight to charge has a lot of obvious commercial appeal, and the underlying technology has a great deal of additional potential.”

The research was funded by the Engineering and Physical Sciences Research Council (EPSRC) and Scottish Funding Council (SFC).