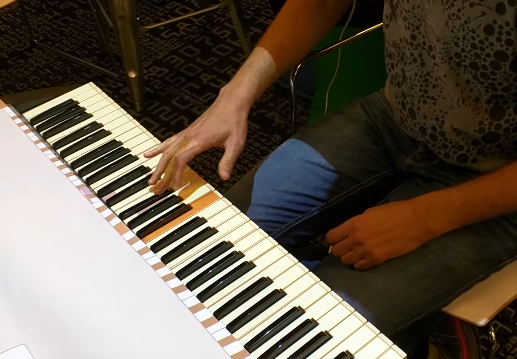 This caught my eye when trawling the many and various Google Blogs, trying to keep up with things for the Eyes on Android blog

The Google OpenSource blog was highlighting the new home for the companies opens source initiatives – opensource.google.com – and mentioned in passing its Light My Piano project.

Basically, it’s an application to help teach novices to play the piano. When set up in combination with an electric piano (MIDI output) and projector, it can light up piano keys just before they should be pressed.

The software can also give you a score based on your progress, with the idea of monitoring your progress over time.

If the piece is too difficult, write the creators, you can lower the playback speed, to gradually increase it again as you become more proficient.

You can play any music you want with Light My Piano; simply search for the MIDI file of the piece you are interested in, and place it in the same directory as
Light My Piano. The file will appear next time you restart the application.

Note this is not an official Google product, but was contributed by Arye Barkan, Dvir Keysar, Yoel Drori, and Zvika Ben-Haim, who are software engineers at Google.

You’ll find the Python code on Github, which is where I found the URL of the YouTube video showing the system in action…

Using Bluetooth, it works with Android and IOS devices, and was recently on KickStarter. It seems 2,066 backers pledged $231,989, and the company is now taking pre-orders.

It’s a mobile typewriting keyboard but can also work as a piano keyboard.

Do you know any more out there?