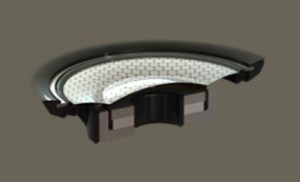 To do this, the firm is replacing the cone and dome diaphragms of loudspeakers with a composite consisting of 95% graphene, 5% binder and possibly other materials. The result has been dubbed a ‘nanocomposite’ and branded ‘Grapheneq’.

The composite is both stiff and light, company founder Ari Pinkas told Electronics Weekly – which are the two most important parameters in loudspeaker diaphragms as one loweres the chance that physical deformations will corrupt the sound, and the other reduces the amont of power required to move the mass of the diaphragm.

How it is formed into stiff light diaphragms remains a company secret – “part of the magic”, said Pinkas.

According to composite inventor and Ora co-founder Dr Robert-Eric Gaskell: “While some consumer products have begun mixing 5% or less of graphene into polymers for added strength, such low percentages of Graphene are not sufficient to get significant performance improvements in loudspeakers.”

The material commonly known as ‘graphene oxide’ (a misnoma, as this would literally be CO2) is being used as the source of graphene, which can be made in bulk by made by treating graphite with strong oxidisers and water.

Although this is far from semiconductor-quality graphene – it is an insulator with oxygen both attached to the grahene and sporadically inserted in its lattice – it is still a high-strength one-atom-thick (or few-atom-thick) flake material.

The composite can be up to 98% graphene by weight, and Ora describes it as: “flakes of graphene bonded together with oxygen and other proprietary additives form a laminate material”.

Ora is not the only company interested in carbon lourspeaker diaphragms.

UK firm Bowers and Wilkins already makes high-end ‘tweeter’ loudspeakers using domes made from CVD diamond, for which it claims a Young’s modulus (stiffness) of 1,000GPa and 3,500kg/m density, that push the frequency at which the domes start to distort physically right out of the audio band – up to 70kHz.

Ora is claiming “Young’s modulus of up to 130GPa”.

“We can produce the same sound quality as CVD diamond, much cheaper,” Pinkas told Electronics Weekly, and compared with more conventional diaphragm materials Grapheneq can double the efficiency of a speaker, extending the battery life of portable audio devices by up to 50%”, said the firm. The “tech will have an impact on most audio products, from home-audio systems, to headphones, cellphones and even hearing aids”.