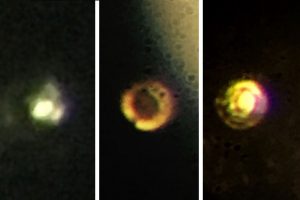 Silvera and Dias compressed hydrogen at 495 gigapascal (GPa), or more than 71.7 million pounds per square inch, when solid molecular hydrogen, which consists of molecules on the lattice sites of the solid, breaks down, and the tightly bound molecules dissociate to transform into atomic hydrogen, which is a metal.

“One prediction that’s very important is metallic hydrogen is predicted to be meta-stable,” says Silvera, “that means if you take the pressure off, it will stay metallic, similar to the way diamonds form from graphite under intense heat and pressure, but remain diamonds when that pressure and heat are removed.”

Understanding whether the material is stable is important, Silvera said, because predictions suggest metallic hydrogen could act as a superconductor at room temperatures.

“As much as 15 percent of energy is lost to dissipation during transmission,” he said, “so if you could make wires from this material and use them in the electrical grid, it could change that story.”

A room temperature superconductor, Dias said, could change our transportation system, making magnetic levitation of high-speed trains possible, as well as making electric cars more efficient and improving the performance of many electronic devices. The material could also provide major improvements in energy production and storage. Because superconductors have zero resistance, superconducting coils could be used to store excess energy, which could then be used whenever it is needed.

Metallic hydrogen could be a powerful rocket propellant opening up more extensive space travel.
“It takes a tremendous amount of energy to make metallic hydrogen,” Silvera explained. “And if you convert it back to molecular hydrogen, all that energy is released, so that would make it the most powerful rocket propellant known to man, and could revolutionise rocketry.”

The most powerful fuels in use today are characterised by a “specific impulse” (a measure, in seconds, of how fast a propellant is fired from the back of a rocket) of 450 seconds. The specific impulse for metallic hydrogen, by comparison, is theorized to be 1,700 seconds.

“That would easily allow you to explore the outer planets,” Silvera said. “We would be able to put rockets into orbit with only one stage, versus two, and could send up larger payloads, so it could be very important.”