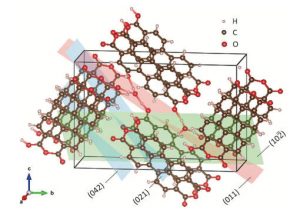 The hydronium ions are reversibly stored in an electrode made from the organic crystalline solid perylenetetracarboxylic dianhydridem (PTCDA). Dilute sulphuric acid is the electrolyte.

“It doesn’t use lithium or sodium or potassium to carry the charge, and just uses acid as the electrolyte. There’s a huge natural abundance of acid so it’s highly renewable and sustainable,” said Oregon scientist Xiulei Ji, who points out that until now, cations – ions with a positive charge – that have been used in batteries have been alkali metal, alkaline earth metals or aluminium. “No non-metal cations were being considered seriously for batteries.”

The PTCDA lattice structure dilates as ions entered, expanding the PTCDA structure – indicating, said the University, that it is hydronium ions, rather than protons, which are far smaller, entering Protons (H+) are already used in some batteries.

“Organic solids are not typically contemplated as crystalline electrode materials, but many are very crystalline, arranged in a very ordered structure,” Ji said. “This PTCDA material has a lot of internal space between its molecule constituents so it provides an opportunity for storing big ions and good capacity.”

According to the abstract of a paper describing the work (Hydronium-ion batteries with perylenetetracarboxylic dianhydride crystals as an electrode in Angewandte Chemie), capacity of 85mAh/g at 1 A/g after an initial conditioning process.

“It’s not going to power electric cars,” Ji said. “But it does provide an opportunity for battery researchers to go in a new direction as they look for new alternatives for energy storage, particularly for stationary grid storage.”