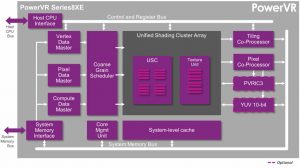 In general, the flops pre-process image – in rich gaming environments, automotive object detection, augmented reality and virtual reality, for example – then the pixel processor creates polygons for the display.

Built on the recent 8XE series, the new GPUs, dubbed 8XE Plus, have 2x or 4x the computational power (see table).

“We are pushing towards gaming environment where people want to do more processing before pushing pixels to the screen,” Graham Deacon v-p of PowerVR business at Imagination Technologies told Electronics Weekly. “The original XE series was for casual gaming – like Angry Birds. Now we have 360° video from FaceBook and Google Cardboard-like applications.” – 360° video involves rendering four images inside a virtual box for all-around image viewing.

In cars, multiple displays are made possible by 8XE Plus GPUs, said Deacon: simultaneous dashboard, navigation. infotainment and reversing camera, for example.

Rendering games at 1080p means better images from digital TVs and set-top boxes. According to Deacon, games tend to be rendered at a lower resolution – 720p on the 8XE series – then up-scaled to HD or 4K by a later stage of the processing pipeline. 1080p rendering increases available image resolution for displays of HD or above.

The latter is the most powerful of all XE GPUs – moving up into high-end phone territory, said the firm. Going any faster required a shift up to Imagination’s  7XT series. “These are more scalable and focussed on performance/W rather than performance/mm like XE GPUs,” said Deacon – look out for the announcement of an 8XT series in 2017.

A 10bit YUV option on certain 8XE GPUs is now going to be offered for high-dynamic range TV (see table), and there is multi-domain hardware virtualisation for anti-hacking security.

Software support for 8XE Plus GPUs comes through graphics, compute and vision APIs including OpenVX 1.1 and OpenCL 1.2. “In mid-range markets, this support is critical since such devices don’t typically incorporate dedicated hardware for vision and compute,” said Imagination. OpenGL ES 3.2 and Vulkan 1.0 are also covered.

Table temporarily removed at the request of Imagination Technologies