As technology has advanced so has our way of interacting with it. The first mobile phone keypads aimed to replicate the familiar push-button approach of a traditional telephone handset.

Twenty or so years later and the introduction of the capacitive touch screen interface fundamentally changed the ways in which we interact with our smartphones. 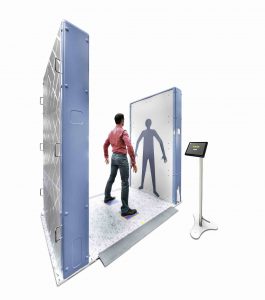 Mobile development has continued to stretch the boundaries of how we use with our devices, whether a smartphone, computer or oven, in order to achieve a more intuitive and natural user experience. Coupled with the development of touch screens came the concept of gestures.

Gesture control is based around hand movements that have complemented other forms of human interaction, such as speech, for centuries. Gestures are now a common method of interacting with many applications using a device’s touch screen.

A user will visually receive an indication that their gesture has been accepted. This is usually by changes of screen options, an audible tone and/or a tactile feedback to the finger, commonly called a haptic feedback and typically achieved by way of a slight vibration.

Such feedback is a vital component of a touch interface, giving the user the confidence that their command was accepted. This approach is now commonplace across phones, gaming controls along with many other consumer, industrial and automotive applications.

The interaction method now gaining popularity is that of a touchless control. This technique allows devices to be controlled using gestures expressed in mid air, the hand position and movements being tracked by 3D sensors or more precisely a camera.

Dispensing with a touch control surface however removes the possibility of the user receiving any form of haptic feedback. To date this has been the main obstacle behind using touchless controls. Imagine however if you could feel turning a cooker knob without there being one, and getting the feeling of turning it as your fingers turn and make that gesture.(See Figure 1).

The term for this form of interaction is touchless haptic feedback. Seen as the technology to provide a tactile indication of a touchless gesture, it is the key to unlock the potential of touchless gesture recognition across a broad range of applications.

Application examples include control of an automotive infotainment system, where the driver does not need to locate and interact with physical buttons or a touch screen but can simply make appropriate gestures in the proximity of the unit, to surgical diagnostic equipment. This later example aids maintaining an infection-free environment where the transmission of bacteria via a machine’s control surface might occur.

The technology that makes this possible uses ultrasound to create a mid-air haptic feedback by displacing the air thereby creating a pressure difference. With many ultrasound waves phased to arrive at the same place at the same time, a pressure difference results that is noticeable by human skin, notably the fingers as they create a mid-air gesture. 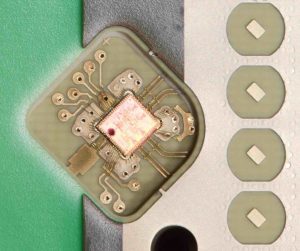 The ultrasound waves generate an acoustic radiation force that when focused onto the surface of the skin creates a shear wave in skin tissue. The resultant displacement of the skin tissue triggers the skin’s mechanoreceptors that interpret the force as a tactile or haptic sensation.

Ultrahaptics is a UK-based company which has created an array of ultrasonic transducers together with proprietary signal processing algorithms that provide a complete interface solution. An ultrasound carrier frequency of 40kHz is modulated within the perceptual frequency range of tactile feeling, this being typically in the range of 100 – 300Hz.

Optimised for hand based haptics, the haptic feedback works best on those areas of the hand that are most sensitive, namely the fingers and palms. Different tactile sensations can be created via a software API that adjusts the algorithm parameters. The API can adjust the phasing of the modulated ultrasound signal to steer the focal point to any given x, y, z coordinate position within the array boundaries. See Figure 2.

Using a 16 x 16 transducer array an acoustic field capable of delivering clear sensations in an area of the order of 160 x 160mm can be achieved. Figure 3 illustrates a simulation of this with the x and y axes corresponding to the field dimensions and the z axis corresponding to the acoustic pressure. The focal point, about the width of a finger, measures approximately 8.6 mm in diameter, this being determined by the ultrasounds 40kHz carrier signal. 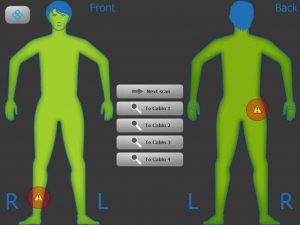 Touchless haptic feedback promises to unleash a raft of new and intuitive interfaces for a broad range of applications. The innovation continues with research into using a two-dimensional array to create 3D interaction shapes such as a sphere, pyramid and cube.

In addition Ultrahaptics is investigating suitable cover materials that provide environmental protection for the transducer array while being acoustically transparent and durable to suit the applications use cases.