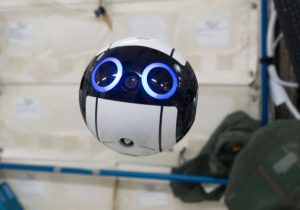 Instead, thrust comes from an internal fan and steering is through three reaction wheels – the latter classic satellite technology.

Inside is one of two exquisitely-engineered (see this and this video) self-contained 3d inertial orientation control modules both aimed at general-purpose use in space-craft, drones and even as self-propelled ‘rolling cube’ ground robots. 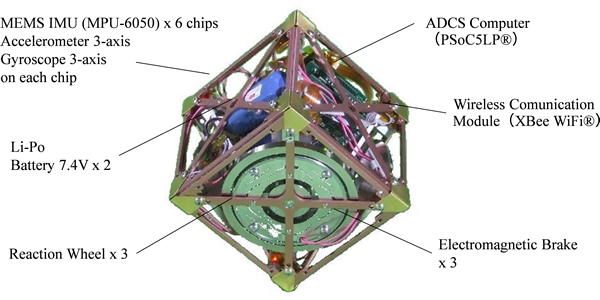 The sensors are mounted on the module’s vertexes to improve attitude estimation accuracy, Hall sensors in the motors also feed-back rotational speed and each wheel has an electromagnetic brake. The brakes can generate 2.1Nm of torque, reducing wheel speed from 6000rpm to zero within 100ms, including demagnetization time.

Also in the module is a wireless tranceiver for telemetry and commands, and the lithium polymer battery.

A smaller inertial unit has 31mm reaction wheels and squeezes these, a guidance control computer and 6-axes of inertial sensing inside a 50g mass budget. Exploration of microgravity asteroids is a potential use for this one, said JAXA.

Int-Ball, short for JEM Internal Ball Camera, was delivered to the ‘Kibo’ Japanese Experiment Module by a Dragon spacecraft in early June.

Many of its parts were 3d-printed.