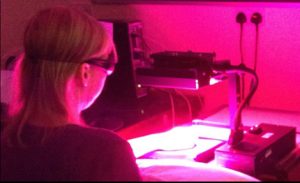 14 ulcers amongst eight patients were exposed to 10J/cm2 for 15 minutes twice weekly for three weeks, with follow-up at weeks four and eight.

After treatment, there was an average 83 per cent improvement in the ulcers, with no side-effects, according to the University. The action is believed to be: ultra-violet light killing bacteria and reducing inflammation that prevents healing, red light increasing the supply of wound healing oxygen and nutrients by boosting blood circulation, and infrared light increasing blood flow and oxygen.

Red light is also thought to stimulate the production of collagen in the skin, providing a scaffold on which new tissue can grow. 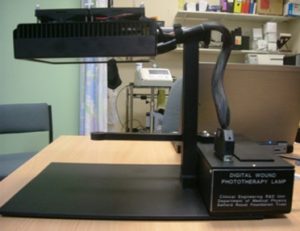 According to trial leaser Dr Michael Hughes, a rheumatologist at Sheffield’s Royal Hallamshire Hospital: “we believe this technology is a game changer; the implications are huge”. The results were so emphatic that the device is a potential treatment for other ulcers, including diabetic ulcers (caused by poor circulation resulting from diabetes) and venous ulcers (caused by pressure in veins due to blood not flowing from lower legs to heart) – which affect tens of thousands of patients.

6 to 12 months of refinement is in the pipeline, with trials on diabetic ulcers mooted within 12 months.

Arthritis Research UK funded the trial, and the work is published in the Journal of Dermatological Treatment.