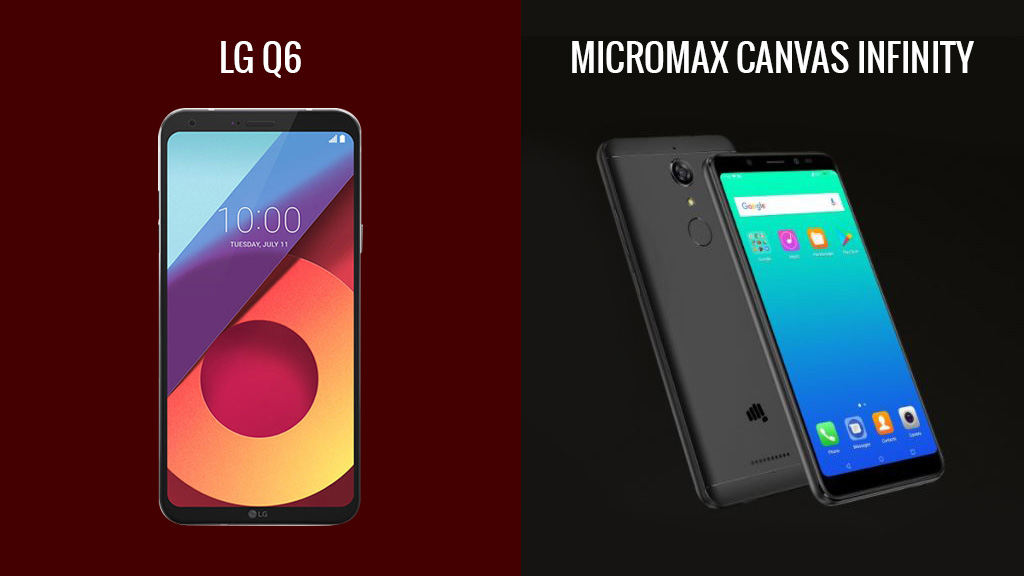 A new trend in the smartphone industry is creating devices with minimal bezels and different aspect ratios. Recently, Micromax jumped the bandwagon and released its Canvas Infinity smartphone while LG launched a toned down version of its flagship in the form of the Q6. Both the companies bring these new fads down to the budget smartphone segment. The LG Q6 is priced at Rs. 14,990 while the Micromax Canvas Infinity is up for grabs at Rs. 9,999. Now, we get that there is a considerable difference in the prices, but both the smartphones are still placed in the budget segment and compete with each other with regard to similar specifications.

In terms of design and build quality, the LG Q6 comes out as the winner as it comes with a 7000-series aluminium frame and a plastic back panel. In comparison, the Micromax Canvas Infinity comes with a plastic body. Despite the presence of plastic on both the phones, the design and aesthetics are still good. What was disappointing though was that the back panel on the LG Q6 couldn’t withstand scuffs and scratches as they start to appear very prominently in a week’s usage. Putting on a case on the Q6 isn’t also an option because it is just fit enough for the palm and putting that would make it bulkier. This came as a surprise despite their budget segment pricing – many phones come with unibody metal design even in this price segment nowadays and LG couldn’t even do with a good plastic panel like the Canvas Infinity. Nevertheless, for their respective prices, both the Q6 and the Canvas Infinity fare very well in terms of design and build quality.

The core attraction on both the phones are their displays, coupled with the minimal bezels and rounded corners. The edges of the phone are curved too, on both the LG Q6 as well as the Canvas Infinity, aligning with the aesthetics of the display.

However, in this segment, the LG Q6 stands out as a clear winner. It comes with a 5.5-inch IPS display with a resolution of 2160 x 1080 pixels, protected by a coating of Corning’s Gorilla Glass 3. The display quality is very good, with good brightness and natural colour reproduction.

The Canvas Infinity, on the other hand, comes with a bigger 5.7-inch display but loses out in terms of resolution. Unlike the LG Q6, the Canvas Infinity features an HD (1440 x 720 pixels) resolution which isn’t adequate on such a big display.

In this price range, having a more powerful processor is always more important than some other aspects. However, given the LG Q6’s price, the company could have chosen a more powerful chipset like the Snapdragon 625.

In real world usage, the Q6 manages to perform surprisingly well even with Snapdragon 435. Multitasking is smooth and apps load fairly fast. Thermal management is also quite decent, with only the frames getting a little warm during intensive gaming.

The Canvas Infinity, on the other hand, can be a little sluggish even during normal usage. The screen’s touch response isn’t the best either, often responding to touches very slowly.

Again, the Q6 wins in this category as well.

Both, the LG Q6 and Micromax Canvas Infinity come with 3GB RAM and 32GB of internal storage along with a dedicated microSD card slot. The Canvas Infinity is the winner in this segment purely due to its lower price.

On the front, the Q6 comes with a 5MP wide angle lens, while the Canvas Infinity sports a 16MP front camera along with a soft LED flash for improved low light selfies.

The LG Q6 takes another win home as the camera performance on it is really amazing. The camera on the Q6 can take crisp shots with accurate colour reproduction and details. If not the one, it surely has one of the best camera available in this price point. LG Q6 has been outfitted with a really great camera module that shoots good pictures in low light as well. The camera focuses on objects in a flash and captures them with great ease.  However, the front-facing camera on the Q6 isn’t that good and shoots moderate quality images.

The LG Q6 is powered by a non-removable Li-Po 3000mAh battery and the Canvas Infinity comes with a removable Li-Ion 2980mAh battery. The difference in battery capacity is negligible which makes both of them last a day on a regular use.

If you are confused whether to buy the Q6 or the Canvas Infinity, you need to ask yourself a simple question about what you’re looking for in the device. If you want good build quality, better processor and a great camera, you can go for the LG Q6. If you’re looking for a device with a fingerprint sensor, good selfie camera and a budget friendly device, the Canvas Infinity is the ideal choice for you. Our recommendation would be to go for the LG Q6 and get the best value for your money.