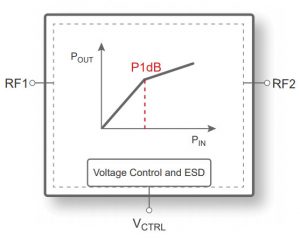 CW power handling varies around 33-36dBm from ~10MHz to 1GHz, depending on temperature (see graph). 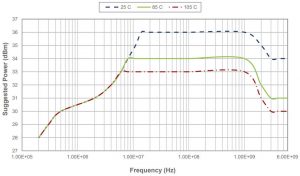 It has two modes:

Power Limiting Mode
It performs as a linear power limiter with adjustable P1dB/limiting threshold, with the threshold adjusted by changing the control voltage between 0V and +0.3V. If unbiased, or set to 0V, it still offers power limiting protection.

Power Reflecting Mode
Power reflecting mode requires a power detector to sample the RF input power and a microcontroller to toggle the limiter control voltage between +3.0V and 0V based on the system protection requirements. At 3.0V, the limiter impedance to ground is less than 1Ω and most of the incident power will be reflected back to the source. At 0V, the device operates as in power limiting mode.

The chip is made on Peregrine’s silicon-on-insulator ‘UltraCMOS’ process.