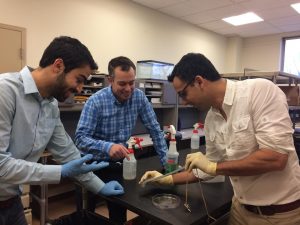 The important characteristics are:

“Our combination of high thermal conductivity and elasticity is especially critical for rapid heat dissipation in applications such as wearable computing and soft robotics, which require mechanical compliance and stretchable functionality,” said Carmel Majidi, from the Carnegie Mellon University team.

The liquid state allows the metal – eutectic GaIn alloy – to deform with the surrounding rubber at room temperature.

When the rubber is pre-stretched, the droplets form elongated pathways that allow heat travel.

“Despite the amount of metal, the material is also electrically insulating,” said the university.

According to a paper on the subject, ‘High thermal conductivity in soft elastomers with elongated liquid metal inclusions‘, published in the Proceedings of the US National Academy of Sciences, heat transport within soft materials is limited by the phonon dynamics, which results in a trade-off between thermal conductivity and compliance.

Adding stretched liquid metal intrusions side-steps the trade-off and “these composites exhibit an extraordinary combination of that far exceeds any other soft materials”, said the researchers.

“Until now, high power devices have had to be affixed to rigid, inflexible mounts that were the only technology able to dissipate heat efficiently,” said fellow researcher Jonathan Malen. “Now, we can create stretchable mounts for LED lights or computer processors.”