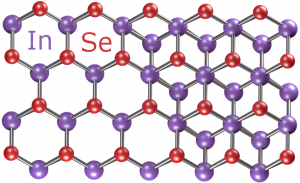 InSe crystals can be made only a few atoms thick and are a better semiconductor than graphene.

To avoid atmospheric damage the InSe crystals were grown in an argon atmosphere which allowed atomically-thin films of InSe for the first time.

The electron mobility at room temperature was measured at 2,000 cm2/Vs, significantly higher than silicon. This value increases several times at lower temperatures.

The researchers believe they can utilise the processes used to produce large-area graphene sheets, to make commercially useful sheets of InSe.