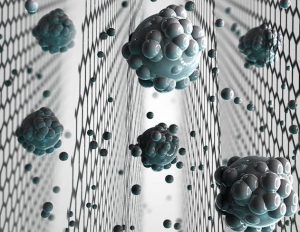 Graphene oxide has been mooted as a filtering material, but it cannot filter out small molecules like dissolved sodium chloride because the ‘holes’ are too big – particularly because they expand a bit in a water environment.

Looking at the abstract of the research paper (Tunable sieving of ions using graphene oxide membranes in Nature Nanotechnology), the breakthrough seems to be that the researchers have found a way to stop the expansion.

“The developed membranes are not only useful for desalination, but the atomic scale tunability of the pore size also opens new opportunity to fabricate membranes with on-demand filtration capable of filtering out ions according to their sizes.” said researcher Jijo Abraham.

It looks like it is necessary to know that dissolved salt molecules travel around with a shell of water molecules, which is what I think Manchester is talking about when it calls them ‘hydrated’.

I also think that, contrary to what at first seemed obvious, that the filtering action is happening with water flowing between graphene planes rather than through graphene planes – and have asked Manchester to clarify.

According to the paper’s abstract, graphene oxide membranes have permeation cutoff of ∼0.9nm, determined by inter-layer spacing of ∼1.35nm of the laminates swollen in water.

With these, ion permeation is thermally activated with energy barriers of ∼10-100kJ/mol – depending on layer spacing.

“We demonstrate a simple scalable method to obtain graphene-based membranes with limited swelling, which exhibit 97% rejection for NaCl,” say the researchers in the abstract.