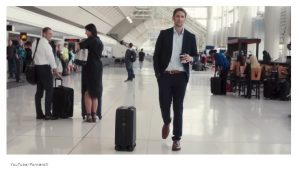 One of the harder things about spending a week in Edinburgh is the schlep from the railway station to whichever far-flung self-catering apartment you’ve rented for the week. The hills in the city are abrupt, and pavements in the Old Town often cobbled, so dragging a wheeled suitcase for a couple of miles is serious work.

Ovis was successfully crowd-funded on Indiegogo and is now at the pre-order stage. The makers describe it as “The world’s first vision-powered Side-Follow carry-on that follows you by side autonomously”. Snappy marketing – a cliché in the making there.

The accompanying YouTube video (see below) shows the case trundling along beside its owner with no physical contact at all, weaving through busy airport crowds. I’m already tempted to anthropomorphise it as ‘cheeky’ or ‘cheerful’ – I guess because the idea of luggage that lugs itself is such a bonus to any traveller. Maxim described it as a ‘sidekick’, so I’m clearly not alone in that. 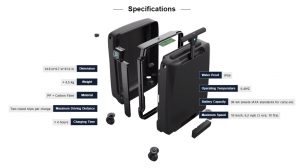 Ovis is designed to fit hand-luggage standards, has a camera that can identify its human owner and a motor that allows it to follow.

Through a series of complex algorithms we have created an AI with the ability to not only “see” as we do, but comprehend what it is seeing. What’s more, Ovis’ side follow technology is far more advanced then following from behind because of the requirement of prediction algorithms. With these state-of-the- art algorithms Ovis is able to easily stay by your side at all times so you don’t have to be constantly looking over your shoulder just to see your luggage. The obstacle avoidance algorithm of Ovis is based on self-driving technology; Ovis is able to accurately sense and assess the environment, calculate the distance, and estimate the direction and route to avoid potential obstacles, with a deviation precision of ± 1cm.” 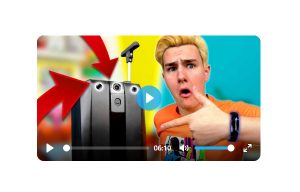 “It’s smarter than a dog!” the presenter exclaims

“It’s smarter than a dog!” exclaims the fan in the ForwardX website’s own video. The case follows him with ease, but then he is sporting bleached blond hair and a lime green jacket. This proves that Ovis would follow Lady Ga Ga in full stage gear, but me in jeans and a t-shirt among a few thousand others similarly clad? I wonder. And the royal Mile in Fringe season, when every other person you meet looks like a full-on Lady Ga Ga impersonator might confuse it!

Joking aside, the case is elegantly designed, keeping the hardware to the edges so that the usable space is maximised, and the designers have never lost sight of the fact that it’s all about what the traveller wants or needs, rather than clever tech included just ‘because we can’.

So the battery that sits between the back wheels and powers the case in motion is also connected to ports at the top of the case where the traveller can recharge a smartphone or other devices.

The removable battery is presented as a security plus, and there is a smartphone app that can tell you the laden weight of the case and can pinpoint the its location if you get separated from it (definitely an Edinburgh plus).

The Video on YouTube is a little more mainstream, and Ovis manages to follow its ‘suit’ among an airport’s worth of other suites, so it definitely shows promise. I will pine for it as I battle with the crowds and the cobbles next week.