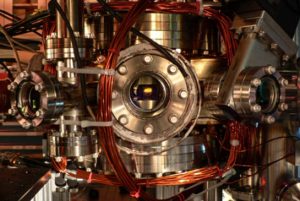 MIT scientists may have found a route to simple molecular qubits that can last for a second.

A second is a long time in quantum computing, which struggles with qubits that de-cohere before they can do anything useful.

The molecule consists of one atom of sodium and one of potassium.

“The most amazing thing is that [these] molecules are a system which may allow realising both storage and processing of quantum information, using the very same physical system,” said fellow team member Sebastian Will. “That is actually a pretty rare feature that is not typical at all among the qubit systems that are mostly considered today.”

To slow de-coherence, the molecules are cooled about as far as is possible – to around 300nK by lasers. The cooling process is one reason two-atom molecules are used. “The more atoms you have in a molecule the harder it gets to cool them,” said principal investigator Professor Martin Zwierlein.

Why not just use atoms?

“Molecules have more handles than atoms,” said Zwierlein. “They can vibrate, they can rotate, and in fact they can strongly interact with each other, which atoms have a hard time doing.” Typically, he said, atoms have to almost be on top of one another before they can interact, whereas molecules can see each other over relatively long ranges.

Sodium-potassium was chosen, amongst other reasons, because the molecule is chemically stable, so it stays complete when it meets other molecules.

It has three key characteristics: rotation, vibration, and the spin direction of the nuclei of the two individual atoms. These had to be set to the lowest state of vibration, rotation, and nuclear spin alignment in the demonstration, and one-second life was achieved using rotation to encode the qubit.

So far, the work has involved a cloud of molecules rather than usefully-constrained individuals. No information has been processed, but attempts are underway to create a quantum logic gate whose result can be optically read through a microscope.

En-route, individual molecules will have to be handled.

“If we can trap one molecule, we can trap two. And then we can think about implementing an elementary calculation between two molecular qubits that sit next to each other,” said Will.

“We have strong hopes that we can do one gate in a fraction of a millisecond,” said Zwierlein. “If you look at the ratio, you could hope to do 10,000 to 100,000 gate operations in the time we have coherence in the sample.”

Then, according to Zwierlein , an array of perhaps 1,000 molecules would make it possible to carry out calculations so complex that no existing computer could even begin to check the possibilities – although such computers could be a decade or more away, he added.