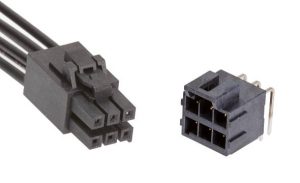 For single row parts (2-8pins) capacity is 14A per pin in tin plate versions and 12A for gold.

In dual row versions (evens 4-16pins) the max currents are 12A and 11A respectively.

Wires from 16 to 22AWG can be accommodated, and electrical specifications include: 400Vmax, 1.8kV dielectric withstanding and 1GΩ insulation.

Optional terminal position assurance retainers guarantee the terminal is fully seated in the housing to reduce terminal back out. “As housings have a positive lock design with an anti-snag feature, mated connector assemblies will not accidentally disengage,” claimed Molex. “The low mating-force terminals have six independent points of contact at the interface and terminals are fully isolated.”