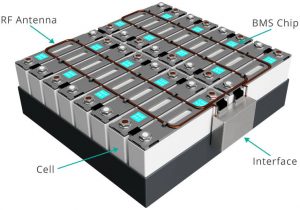 Unlike competing technologies, the firm is proposing that every cell in a battery includes its own measurement and intelligence, with cells co-operating over local wireless links. Car makers are interested.

“This latest funding takes the company through the final development and readiness of the semiconductor, including multi-industry certification. It also supports the expansion of Dukosi’s team in Edinburgh with new roles in electronics design, software, cell modelling and electrochemistry,” said the firm.

Until three years ago, Dukosi was a mixed-signal asic design house.

“We were already getting interested in battery management when a large American automotive company put out an international tender for a feasibility study, and we won,” CTO Joel Sylvester, told Electronics Weekly.

The unique selling point for Dukosi’s monitoring system sprang from a limitation: the firm didn’t have access to a high-voltage mixed-signal process.

“Existing battery management systems are built around chipsets,” said Sylvester. “They were all designed around 15 years ago and are revisions of existing architectures – all based around what the big names do well – proprietary high-voltage silicon.”

In existing systems, all the cell voltages and temperatures are passed down the series string electrically to a central processor which models all the cells and works out how the battery is performing.

Without a high-voltage process, Dukosi’s solution was never going to be passing data up and down hundreds, or even tens, of volts.

“It made sense for us to have a per-cell monitoring circuit,” said Sylvester. “Currently we have a three chip solution. Ultimately we are going to integrate it into our own chip – the project is already kicked off.”

Its concept is: All cells are identical, and there are no electrical connections outside the cell except for the power leads. Electronics in the cell measure local voltage, local current and local temperature, as well as running an adaptive cell model (at the moment on an ARM Cortex-M3 from STMicroelectronics) to determine state-of-charge and health of the cell. Calculated state-of charge data is transmitted to the central computer.

“There is a certain elegance to working it out locally,” said Sylvester. “If a single cell is looking after itself, it doesn’t need to worry about the others. It doesn’t have to know about the battery configuration.” In many cases, cell models already exist. “Most customers have put masses of work in already.”

Voltage and current sampling is at 125sample/s, but after in-cell number-crunching there is far less data to sent to the central computer, which is why it can go wirelessly. “The system doesn’t need high-speed voltage information, just the estimate of state-of-charge, which can go once or twice a second.

For wireless comms, Dukosi has gone for near-field inductive links in which a single battery pack master antenna meanders across all of the cell tops (see diagram), and each cell links to this via its own twisted-pair antenna (equivalent to a transmission line). It works with the cells in any orientation, and antenna can be separated by up to 10mm.

“With an inductive hear-field mechanism, we know exactly what is coupled into what, and the communications are insensitive to local noise because it is near-field communication,” said Sylvester. “If you broadcast far-field, there is an awful lot you have to worry about. For example, adding a lid to the battery pack changes coupling. We don’t have that problem.”

Do fields from the main battery current saturate the system?

“We have not seen it yet, and we have done pre-compliance testing, said Sylvester.

No cell-to-cell synchronisation is required. Instead a TDMA protocol is used to establish using two-way communication. For identification in the system, each cell has its own unique ID number – currently based on the varying number programmed into each microprocessor as STM manufactures it.

As all cells are in series, and Li-ion cells are very fussy about charge voltage, all automotive battery packs need some form of charge balancing to bypass current once they are full.

The simplest type is ‘passive’ balancing where each cell has its own resistor that can be switched across its terminals by a mosfet.

‘Active’ balancing is the more advanced where, instead of dissipating energy not required by a cell, the energy coupled by inductive or capacitive means to cells that are not yet full. This can also be used during discharge to support cells that are nearing empty.

Dukosi has implemented per-cell passive balancing in its three chip solution – where all the components are on a PCB that is bolted straight across the battery terminals. The master controller tells individual cells when they should enter balancing mode over the two-way link.

“Per-cell energy passive balancing means no additional connections, and the energy dissipated by balancing is spread across the whole pack, rather than being concentrated at the centralised battery management system,” Sylvester told Electronics Weekly.

With the forthcoming asic version, due for evaluation end Q2 2018, the intention is make the circuitry part of the cell – inside the enclosure although not submerged in the electrolyte.

“It is fairly straightforward to provide a good thermal connection between the balancing load and the cell bulk. Per cell temperature measurement allows any small temperature rise on balancing to be measured and compensated for,” said Sylvester. “Hence placing the asic inside the cell is not an issue, at least, not because of balancing.”

As well as passive balancing, the asic version will have circuitry provision for active balancing although, if this is exploited, the associated power mosfet switches will have to be outside the cell along with an isolating magnetic component.

Because of its everything-inside-the-cell elegance, per-cell current sensing is Sylvester’s preferred method, although he does not rule-out having a single wirelessly-enabled current sensor per series cell string that broadcasts to all cells.

If internal per-cell current monitoring is required, the firm has techniques that are sufficiently accurate with only a tiny current-sensing resistance, according to Sylvester – even the parasitic resistance inherent in an internal cell conductor is suitable, he said, explaining that because internal conductors are made from high-quality aluminium or copper with well-controlled impurities, internal cell temperature to be used to accurately compensate for thermal resistance changes.

Dukosi also has a technique for compensating for initial resistance variations of +/-50%, calibrating its signal chain for all-time during the electrochemical formation and test process that every cell has to go through during manufacture.

As an aside, there are three basic types of Li-ion cell: cylindrical, prismatic and pouch. The last two have similar electrode construction, and in larger sizes are the types Dukosi is aiming to work with. Pouch designs carrying the least container dead-weight, but are more vulnerable to poor handling.

Sylvester is certain the firm’s per-cell battery monitoring system covers all performance and management needs in operation but, as the system has no absolute knowledge of where cells are, what happens if something goes wrong and maintenance is required – how does a maintainer physically locate a cell that has been flagged as faulty?

They don’t need to, is Sylvester’s reply. “There is nothing to stop you swapping an individual cell, but nobody does it – they change the pack,” he said.

Where he does see a need to know the physical position of cells within a pack is for quality assurance.

“For example, you need to know if the cell in the corner always fails because too hot. This is not traditional maintenance, it is traditional quality assurance,” he said, “We have had conversation with cell and pack manufacturers, and they already have ways to put pack information into their systems, so their records tell them where cells are.” That said, “we do have ideas how to tell where a cell is in the string”, he added.

The new funding has been lead by IP Group.

“We back companies with transformative approaches to provide clean energy,” said IP Group director Jamie Vollbracht. “Technologies that bring more intelligence to batteries represent a compelling area for investment and we are delighted with the tremendous progress the Dukosi team has made since our first investment in 2014.

The new investment round fulfilled by existing shareholders, including Scottish Investment Bank, the investment arm of Scottish Enterprise, and members of Par Equity.

An issue with small companies with new technology trying to get business from the notoriously conservative automotive industry is credibility.

And for this, Dukosi has credibility through an as-yet unnamed partner.

“The asic will be supplied through a major name,” said Sylvester. “Dukosi, as small company, will have to stay out of supply chain, so the supply chain and product support will be part of our partner’s responsibility.”