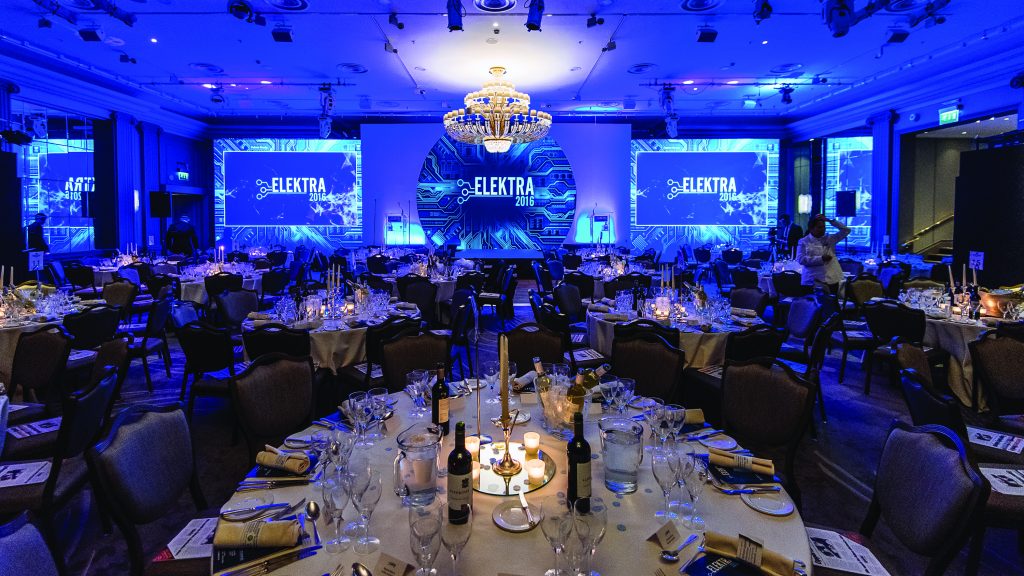 David Berman is the in-house Multimedia Producer and videographer for Electronics Weekly’s parent company, Metropolis. He said the secret to getting good videos in the bag in what can be a busy, noisy, emotional environment is being a good communicator – not necessarily the first thing you would expect to need if you work behind a camera all the time. “Communications skills I would say is 80% of making sure we get the best results on the night,” he said.

“The Elekras are a special awards night. They are a big deal. It’s important to remember that although I may go to lots of awards events during the year, for the person standing in front of me the award they have just won is hopefully one of the highlights of their year.

“Shooting awards events can be incredibly rewarding, particularly when it’s the first video interview somebody is taking part in and they are initially nervous,” Berman said.  “I get a lot of pleasure providing them with a good experience that allows them to give the best performance they can.”

“We are also very lucky to be supported by the events team who escort winners from the stage to the studio. When I first started shooting awards, I had to wait until after the ceremony and try to fetch winners from their tables. That was tough,” he added.

Multimedia assistant Chris Dicks said: “Making and then keeping in touch with a contact after a successful interview is always rewarding.”

Berman and Dicks cover events and awards ceremonies for 10 different brands on at least 30 nights a year, which means they need to keep up with topical issues and technical jargon from a diverse range of markets. So is it difficult, I asked, to put people at ease and to get them to start – or stop – talking?

The challenge (especially at awards shows) said Dicks, is to get a varied response from interviewees. “People tend to say just the right amount for us to use in the post production process, but many people use very similar phrases and so we have to be creative with a lot of the same answers.”

What’s the funniest thing that’s happened to you in a video interview, I asked Dicks?

“Recently I had a large group of winners come in to do an interview. They were very excited and all wanted to go on camera together (which can be a problem if there are more than two people, and in this case there were five). As I did not want to disappoint them I allowed them all to go on screen and we had a good laugh asking and answering the questions.”

Rowdy behaviour is occasionally a challenge. “People may have had quite a long and tiring night,” says Berman. “Most people we speak to are professionals and can ‘fly straight’ for the duration of the interview. It’s quite fun and we expect them to be exuberant and excited, so that’s great. It’s a great pleasure to meet people who are at the top of their game.”

But sometimes things get ‘interesting’. “I have had quite a senior person be a little too relaxed, so that we could not use their footage but, like a good hairdresser, I couldn’t possibly tell you who they were,” laughs Berman.

Video interviews of last night’s Elektra Awards winners by Berman and Dicks will be available here later today. The Electronics Weekly team hope that everyone who attended the awards ceremony last night enjoyed the evening.