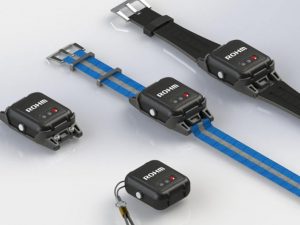 And the following can be added:

The node is the result of collaboration between Rohm and Kionix, and its sensor mix “makes it an excellent choice for prototyping and developing consumer IoT applications ranging from wearables, health, wellness, games, toys and smart home devices; to industrial IoT applications such as smart city sensor networks, asset management and logistics monitoring and factory automation.”

Bluetooth 5 offers a higher raw data rate – up to 2Mbit/s – and more range than Bluetooth 4.2, as well as better coexistence with other wireless devices and improved broadcast and beacon function.

It can be powered by a rechargeable Li-polymer battery, replaceable coin cell batteries, or via Micro-USB.

“The automated power consumption system of the Bluetooth 5 SoC, and the configurable power management modes of the sensors, give the RoKi sensor node about 8 hours of typical active usage, and an estimated standby time of 200 hours,” said Rohm.

It comes in a 42x67x22mm housing with a programmable RGY LED, expansion is through connectors, and there is also 64Mbit of additional flash memory.

Mounting accessories allow it to be attached to surfaces with screws or be worn like a watch.