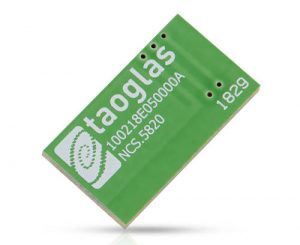 There is also a thin, flexible multi-band antenna that supports all LTE bands—including the new Band 71 that will be used for NB-IoT in the U.S.

“Narrowband IoT is emerging as a go-to LPWAN option for applications that need to support a large number of devices, especially in challenging environments such as indoors or underground,” said Taoglas CEO Ronan Quinlan. “The low profiles and small footprints of the Extensis antennas along with their multi-band capabilities make them an excellent choice for device designers. Having access to three bands on one antenna also allows them to plan for global deployments.”

While it covers 130 x 30mm, it is only 0.2mm thick, and “the world’s first to include LTE Band 71 in an off-the-shelf cellular antenna product”, said the firm.

The antenna is compliant to T-Mobile’s 600MHz over-the-air requirements when properly integrated into a device.