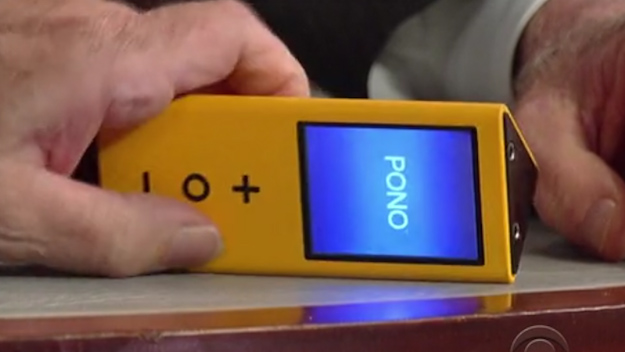 Touted as Young’s way of “[moving] digital music into the 21st century” the player’s unusual triangular form-factor, poor battery life and lack of Wi-Fi and Bluetooth made it a hard gadget to recommend.

In a recent interview with Rolling Stone however, Neil Young has suggested that the Pono brand may live on as a hi-res music streaming service.

“We’re pushing towards getting a presence in phones,” said Young.

Currently, the highest resolution streaming services available (Tidal, and the Sonos-exclusive Deezer Elite) top out at CD-quality 16-bit/44.1kHz, but the Pono Player’s hardware could handle music up to a maximum resolution of 24-bit/192kHz.

Hi-res music has been a long time coming to streaming services. Tidal has been working with hi-res music technology MQA for a couple of years now, but the technology has so far failed to materialise on the service.

However, hi-res music will also prove challenging in terms of hardware, since most phones (where the majority of music listening is now done) do not currently have the hardware built in to decode high-resolution music.

Using the LG G5 with its optional B&O Play Hi-Fi Plus module means the phone is able to handle music up to a resolution of 32-bit/384kHz, and the HTC 10 supports up to 24-bit/192kHz, but most phones, such as Apple’s iPhone 7, top out at much lower resolutions such as 24-bit/48kHz.

What this means is that for Pono to bring out a high-resolution music streaming service, either the standard of the internal DACs included with phones needs to improve, or else Young and his team will need to rely on people using external DACs.