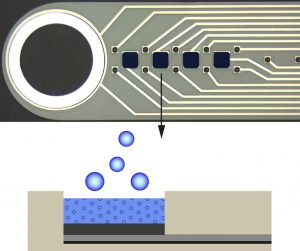 Such interfaces are used to sense and influence brain waves and, although they are easy to implant, are challenging to keep running properly in living organisms over time, according to the Univerity of Freiburg.

“After a while, the immune system tends to treat most of the bidirectional neural implants – that is, those that are implanted for measuring and stimulating simultaneously – as a foreign object. That is the reason their functionality becomes so limited. After a few weeks they barely give off any signals at all,” said engineer Christian Böhler.

The team created a coating that allows a probe to be accepted, with neural tissue growing around without inflammation. Even after twelve weeks it is still able to deliver strong signals, said Freiburg.

The coating over the polyimide implant is the polymer ‘PEDOT’ that can absorb some chemicals – which the same team showed last year.

For the probe, the anti-inflammatory compound dexamethasone was loaded into the PEDOT, and then persuaded to transfer from coating to tissue in a controlled way by applying a potential.

“In this way, we can pour the medicine directly around the implant, regulate the dosage and determine the time it is administered,” said Böhler.

Compared to traditional methods for drug administering, said the University, a much lower dosage can be used, limited to a specific area.

“Many more promising avenues for long-term treatments with, for instance, deep brain stimulation can be explored with this system,” said the University. “Patients whose nervous system requires not only regular stimulation but also close measurements and monitoring, such as those with Parkinson’s or epilepsy as well as people with obsessive-compulsive disorders or severe depression.”

‘Actively controlled release of dexamethasone from neural microelectrodes in a chronic in vivo study‘, published in Biomaterials.

Image The microprobe was manufactured in Freiburg to both stimulate and gather data. Its cross-section shows the PEDOT coating that stores anti-inflammatory medicine that can be released by applying voltage. Source: Christian Böhler, Maria Asplund.