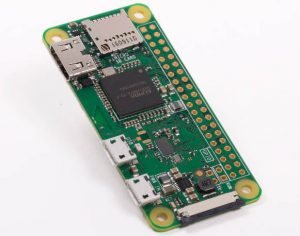 Costing $10, it gets the same Cypress CYW43438 wireless chip as Raspberry Pi 3 Model B to provide 802.11n wireless LAN and Bluetooth 4.0 connectivity.

It also picks up a camera interface that was not on the original Zero.

“We imagine you’ll find all sorts of uses for Zero W,” said Foundation co-founder Eben Upton. “It makes a better general-purpose computer because you’re less likely to need a hub: if you’re using Bluetooth peripherals you might well end up with nothing at all plugged into the USB port. And of course it’s a great platform for experimenting with IoT applications.”

It has three interchangeable lids:

The list of distributors that carry Zero has been extended and now includes: ModMyPi in the UK, pi3g in Germany, Samm Teknoloji in Turkey, Kubii in France, Spain, Italy and Portugal, and Kiwi Electronics in the Netherlands, Belgium and Luxembourg.