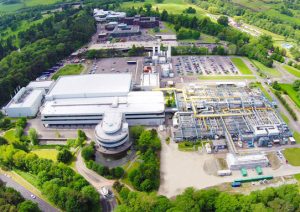 One of the three directors of Neptune 6 is Dr Drew Nelson, founder and CEO of IQE, the key player in the Cardiff Compound Semiconductor Cluster.

The Newport Wafer Fab name will be kept on.

The fab has had several owners: In 1984, Thorn EMI bought Inmos and in 1989 Thorn sold the company to ST; in 1999 an MBO resulted in the fab being renamed European Semiconductor Manufacturing which went into administration and the fab was sold  to International Rectifier in 2002.

Infineon took over IR in 2015 and announced its intention to sell or close the Newport fab.

“The Newport site, which comes with a skilled workforce of highly reliable and very experienced people, is extremely well placed to contribute to the rapidly emerging international Compound Semiconductor Cluster of South Wales,” says Neptune 6 legal director Steve Berry, “the fab is very well equipped to act as a globally competitive chip foundry, and Newport Wafer Fab Ltd. will be highly complementary to the existing semiconductor expertise in the region and can provide the employees, the region and the UK with a very bright future in high-volume advanced semiconductor chip manufacturing.”

“The Welsh Government has been able to support a deal to save the Newport site and the jobs of the people employed there,” says Ken Skates, Welsh Cabinet Secretary for Economy and Infrastructure, “the closure of the site in Newport would have been a major setback for the local and national economy and would greatly detract from the substantial investments made to establish Wales as a global centre for advanced compound semiconductor technologies.”

The site will form a key part of the Compound Semiconductor Cluster over the coming years, says Skates.