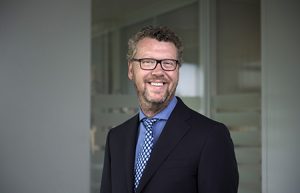 Nexperia is NXP’s former Standard Products division which was sold to Chinese financial investors JAC Capital and Wise Road Capital for $2.75 billion last June. The company is a leader in discretes, logic and MOSFETs.

Scheper led the unit at NXP to over $1.1 billion in revenues last year, and is now CEO of the new, independent company which employs 11,000 people.

‘The investors are focussed on growing the company,” Scheper told EW, “they are small funds in terms of people and are not putting in management, they’re not flying in squads of people. The business is in very good shape. Very healthy.”

Unlike NXP’s former private equity owner KKR, JAC and Wise have not imposed a huge debt on the company. Nor are they seeking to extract the technology and transfer production to China. Nor are there plans to merge the business with the old NXP RF Power business which JAC also bought.

“The core plan is to keep them separate,” said Scheper, “each has its own merits and assets and being focussed has a big advantage – I am convinced of that.”

After years of private equity style cost reduction at NXP, the company’s new investors are setting Nexperia on a different path.

Nexperia is already engaged in that strategy with six to eight inch conversions at its Hazel Grove and Hamburg fans.

Internally Hazel Grove is now being named ‘Manchester’ but it’s hard not to think of it as Hazel Grove – one of the longest continually running fabs in the industry and an iconic industry site. But maybe, to the modern generation, there’s more glamour to be had from the association with the city’s two great football teams,

75-80% of Hazel Grove/Manchester will be on 8 inch by the end of the year and Hamburg is already at that level and will be 90% eight inch by year-end.

The transformation adds 20-35% to the output at both sites which is needed to meet the market demand.

“We should be able to grow much faster than the market, ” said Scheper,”in the MOSFET market there’s a huge opportunity because of hybrid and electric cars. The automotive market will be a big focus – most of our products are automotive quality – our aim is to have one quality standard for all our products and that’s the highest quality.”

The company has just started producing MOSFETs in Hamburg as a second source to Hazel Grove.

Schemer says the fabs are “already pretty full” and has talked about the possibility of buying a third one if growth becomes “very extreme”, but would prefer to expand and upgrade the existing sites.

As for using foundries, Scheper says: “I am concerned that we have to keep these processes in house. Quality is intrinsic to the process. Part of our value is that we have front end and back-end manufacturing for most of the production.”
Having both front end and back end fabrication allows Nexperia to continually improve the product and its current emphasis is on reducing the size of the packages. We’re leading the industry in packaging,” stated Scheper.

There’s another thing about the foundry option that does not appeal to Scheper. “Maybe I can afford the margin,” he said, “but I prefer to keep it in my own pocket.”

Growth is also coming from new lines. In the first half of this year, Nexperia’s first GaN products will be out on the market. Scheper is also interested in SiC but said: “It’s not in my game plan at the moment.”

He’s also resisting the lure of the glamour end of the industry – driverless cars, ADAS etc. “I leave that to other people,” said Scheper, “you need to know your limits.”

Nexperia’ investors, Wise and JAC, are helping out at the China end. “They have strong networks with Chinese customers and can open up doors for us,” said Scheper, “they are also finding suppliers for us. They are doing anything they can to help us.”

Scheper may have another another big advantage – luck. “The market’s pretty healthy,” he said, “China is doing well in mobile, the growth in Japan is going well, the US, in the last year, looks pretty OK, but Europe and the auto industry are the fastest growing areas.”

The timing is excellent – the good ship Nexperia has caught the tide.