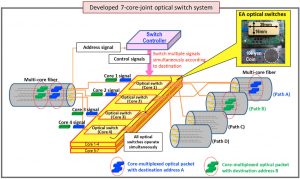 The switch can handle seven cores in a fibre, switching all cores simultaneously in 80ns.

On each fibre, seven cores were used to carry information signals.

The results of this work were presented recently at the 43rd European Conference on Optical Communications (ECOC) in Gothenburg, Sweden.