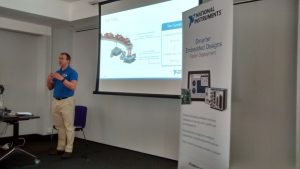 It is the attempt to answer some of the challenges for the transmission of large amounts of data deterministically, via ‘Hard Real-time Ethernet’. Basically, managing what goes over a network beyond the transmission of basic data. For example, high-performance I/O, multi-axis motion controllers, process and machine health monitoring, man-machine interfaces, machine vision, and process and machine health monitoring…

Specifically, these are being addressed, respectively, by IEEE standards 802.1ASrev, 802.1Qbv and 802.1Qcc (NI has been participating in the standards process).

Traffic scheduling (Qbv) involves when messages are allowed to go out. “Every egress on the network is scheduled and can follow a repeating cycle,” according to Emery. THis requires, for example, the deterministic arrival of packets and a scalable designs.

Finally, there is System configuration (Qcc), which plays a big part in making a system robust, said Emery. This involves a “consistent mechanism for network configuration to meet the needs of end applications”. Basically, to support a standard mechanism for specifying configurations, with the ability to configure streams between devices from any supplier.

This last point is important, noted Emery, because standard Ethernet can be used to provide similar support but all the necessary modifications create a bespoke or proprietary systems. Hence the need for an alternative, standards-based approach. Very basically, suggested Emery, in terms of the seven layer ISO model, support is pushed up into the application layers without interfering with the underlaying hardware layers.

As mentioned,  there is to be Early Access Technology Release from National Instruments to support TSN. This involves two new NI parts (cRIO-9035 and cRIO-9039, featuring Intel Atom processors and the Intel i210 TSN-enabled NIC), TSN software and a Cisco switch (to cover the IT piece), with under 100ns comms between CompactRIO controllers on the network and deterministic comms over standard Ethernet.

Users that want to access the technology platform have to join the NI Community “Time Sensitive Networks”. This is the URL quoted, for more information: http://landing.ni.com/time-sensitive-networking-en.

“The coming changes to standard Ethernet: Industrial IoT convergence with the control system” was the title of the NIDays presentation.

Two bodies to note in this area are the Avnu Alliance and the Industrial Internet Consortium. The former covers certification for TSN-based Ethernet solutions. The latter, the IIC, develops “the standards, best practices and processes of the Industrial Internet” to help simplify multi-vendor systems targeted at vertical applications, and it also hosts testbeds.