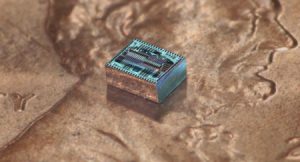 “With our system, you can selectively look in a desired direction and at a very small part of the picture in front of you at any given time, by controlling the timing with femtosecond – quadrillionth of a second – precision,” said Professor Ali Hajimiri.

Last year, Hajimiri’s team showed a one-dimensional version of the camera that was capable of detecting images in a line. This year’s has an array composed of just 64 light receivers in an 8 by 8 grid.

The resulting image has low resolution, but this system represents a proof-of-concept for a fundamental re-thinking of camera technology, said Hajimiri.

“Even in today’s smartphones, the camera is the component that limits how thin your phone can get,” said reseacher Behrooz Abiri. “Once scaled up, this technology can make lenses and thick cameras obsolete. It may even have implications for astronomy by enabling ultra-light, ultra-thin enormous flat telescopes on the ground or in space.”

It “opens a new world of imagers that could look like wallpaper, blinds, or even wearable fabric,” added Hajimiri.

Receiver phased arrays, use variable phase delays from each pixel/antenna to constructively interfere signals from one direction only, light from other directions to a greater or lesser extent cancels out in the receive signal.

“What the camera does is similar to looking through a thin straw and scanning it across the field of view. We can form an image at an incredibly fast speed by manipulating the light instead of moving a mechanical object,” said team member Reza Fatemi.

The next task is to designing chips with higher resolution and sensitivity.

A paper on this, ‘An 8×8 heterodyne lens-less OPA camera’, was presented at the Optical Society of America’s conference on lasers and electro-optics (CLEO).