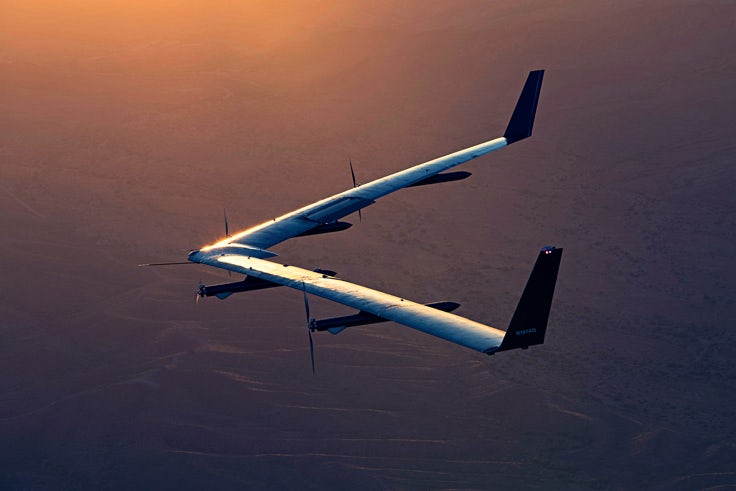 The solar-powered craft, which support Net access from the ground, is part of the company’s plan to bring connectivity to undeveloped regions. Its second test flight took place on 22 May, with the drone flying for 1 hour and 46 minutes, before landing at a prepared landing site.

Despite a wingspan apparently larger than a Boeing 737, Aquila is a light-weight construction, with solar panels on its carbon fiber wings and frame.

The plan is for the drones to be able stay up in the air, self-powered for 90-days. 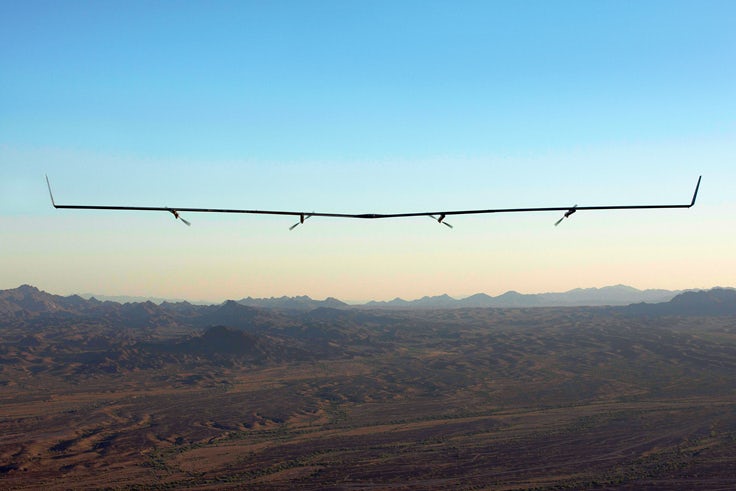 It wasn’t a completely smooth landing, however, as the drone has no traditional landing gear. Facebook writes:

Aquila is designed to stay aloft for 60 to 90 days and doesn’t have traditional landing gear. The aircraft lands on skids on the bottom of the motor pods, with simple foam bumpers to prevent the motors and propellers from digging in, which is why we expect some damage to the aircraft upon landing. However, we also experienced a structural failure just seconds before the landing that resulted in additional damage to the right wing. As is normal in circumstances like these, we reported this damage to the National Transportation Safety Board (NTSB) for review. The protocol associated with NTSB reviews prevented us from sharing any details on the review or cause of the structural failure until the review was complete — but the NTSB just published their report, so we can now share more details on this aspect of our first test flight.

Apparently, Internet connectivity will be provide via air-to-air and air-to-ground laser-based communications, which will involve links with other Aquila drones.

Lessons learned on the latest flight? According to Facebook:

We learned a lot from this test flight and are already working to incorporate fixes into future designs and flight testing:

Future Aquila airframes will incorporate a drag device such as a spoiler or airbrake that the autopilot can use to steepen the descent without increasing airspeed.
In future flights, we will command the autopilot to give priority to keeping the airspeed under the limit, sacrificing altitude tracking if required. This could mean a less accurate landing, or a go around if the airplane deviates too far above the glidepath.

What’s new in Aquila v2.0? Mods to the drone include some “spoilers” on the wings to help increase drag and reduce lift during the landing approach.

Also, hundreds of sensors gather new data, the auto pilot software was modified , there were new radios for the communication subsystem, and they installed a horizontal propeller stopping mechanism to better support landings.

The first flight of Aquila took place in July in 2016.

See also: It’s Never As Easy As You Think